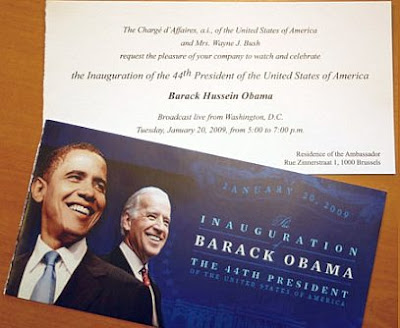 In reference to the previous post, here’s a follow-up concerning the (withdrawn) invitation issued to members of Vlaams Belang. The editorial below is taken from the VB website (translated once again by VH):

Three weeks ago all fraction leaders and the members and the mandatory members of the Foreign Affairs commission of the Senate, received an invitation to witness the taking of the oath by Obama at the Embassy of the United States in Brussels. This morning it suddenly seemed that Vlaams Belang was not welcome, when our Senate fraction received a last minute call from the Embassy to inform them it was a “mistake”.

By suddenly making a distinction between members of parliament on the basis of their political affiliation, the U.S. steps de facto into the Belgian logic of the “cordon sanitaire”. Apart from the fact that the manners of the Embassy do not testify to very good manners, and are improper for the largest democracy of the World — as Joris Van Hauthem expressed in a reaction — it must be noted that it is not the task of an Embassy — even if it is that of the United States — to mingle actively in internal politics of another nation. Or are we “mistaken”?