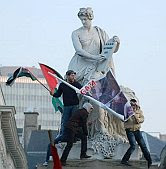 Below is my translation of a Bivouac-ID post from January 3rd, concerning the recent pro-Hamas demonstrations in Brussels. Islam in Europe has a similar post, using some of the same photographs.

Visit Bivouac-ID to see larger versions of the photos, which came originally from Indymedia.

The events that are now unfolding all across Western Europe remind me of a scene in the movie Cabaret, which takes place in Germany in the early 1930s. 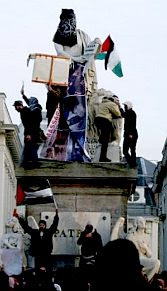 The main characters of the film are sitting in a rural biergarten when a group of young Nazis in uniform stand up and begin singing “Tomorrow Belongs to Me”. As the stirring music reaches its climax, one by one the other patrons of the establishment rise and join in with the song.

In contrast to twilight of Weimar Germany, the chorus behind the young thugs in Brussels is drawn from the elite Socialists of the European establishment, rather than from ordinary Europeans. Without their discordant Euro-harmony, these disturbing events could never occur and be photographed.

Tomorrow may indeed belong to these punks, but we shall see.

Belgium: When supporters Islamofascism cover a symbol of Belgium with the flag of Islam 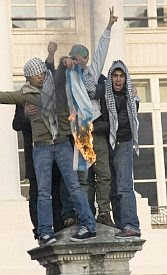 Supporters of Islamic fascism climb the Patria monument that symbolizes the nation of Belgium, and cover it with Islamic flag, the flag of Jihad.

La Place des Martyrs in Brussels is a place that celebrates the Belgian national identity. Under its cobblestones are buried the heroes of the September Days of the Belgian Revolution of 1830. At its center stands the monument Patria, which symbolizes the homeland of Belgium. This is the highly symbolic monument that Hamas covered with the flag of Islamic Jihad. Is it prescient of the future Belgian identity? Isn’t Mohammed the name given to the Brussels region since the 1980s? 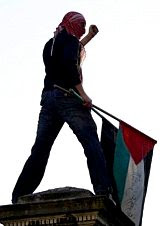 Is it acceptable that the flag of Hamas flies with impunity over the streets of Brussels, the flag of a movement rightly recognized as a terrorist organization by the European Union, Canada, Japan, the United States, and Israel, and which aims to eradicate the state of Israel and to bring about the barbarism of Sharia, waiting for “the promise of God” which is to exterminate all Jews on Judgment Day (all this is easily verifiable, just read the charter of Hamas)?

Are we in the West aware that in their televised speeches members of Hamas routinely call on their coreligionists to conquer Rome and the capitals of the entire world? Is it paramilitary indoctrination in the manner of the Hitler Youth when Hamas forces children to attend “schools” of the movement? Have we really seen the salute of the Hamas militia (those of Fatah remain identical)? 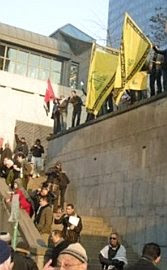 The face of hatred and stupidity: Islamofascism supporters waving the flag of Jihad and burning an Israeli flag.

It is a sad day for democrats and defenders of human rights when the zealots of Islamofascism and their useful idiots can hit the streets of our capitals, and with impunity cover our national symbols with fascist banners. The awakening of conscience, when it finally happens, will be painful. All the more painful, since it will probably be too late.

Sympathizers with Islamofascism. Note in the photo on the right the flags of Hezbollah and Hamas, military and religious organizations that have both shown, among other goals the eradication of Israel.

One thought on “The Awakening of Conscience”