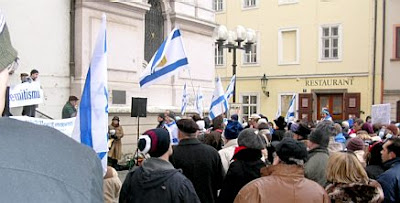 Our Czech correspondent Martin, who blogs at Převážně neškodné, just sent us an email about a pro-Israel demonstration that was held today in Prague:

Just to inform you, today between 14:00 — 15:15 there was a pro-Israel demonstration in Prague. Attendance was not heavy, because it has been damn cold there!

Spokesmen criticized political correctness and anti-Israeli bias in the media. If I remember correctly, one of the participants quoted part of the speech delivered by Geert Wilders in Jerusalem in December, and there was also criticism of Islam and its roots.

Thesis: “There is nothing like moderate Islam, just Islam”

From what I have read in the media, they say there were overall about two hundred participants. I have posted some photos from the demo (including one photo of an attempt at a counter-demo by about 30 supporters of Palestine:) at my blog. There were also some demonstrations against Israel — on 2nd January 100 people, 8th January about 80 people.

Even if you can’t read Czech, go over to Martin’s place and see the rest of the photos. The one showing the counter-demonstrators is somewhat dark, but some of the participants in it look suspiciously like the “blackhoods” of Antifa.

3 thoughts on “Pro-Israel Demo in Prague”