Below is a report from our Austrian correspondent ESW about the Austrian city of Telfs, which has a large unassimilated Turkish population, and lives in denial about the existence of any problems.

The Austrian Broadcasting Corporation (ORF), currently under fire for its worrying financial situation, has upped the ante by providing its viewers another one-sided perspective of problems with (Muslim) integration.

ORF devoted its Sunday prime time program to integration problems. This included a movie about the murder of a Turkish girl and her Austrian boyfriend found dead in the forests surrounding the city of Telfs. Telfs, located in the western part of Austria, is most famous for its relatively large Turkish population and its mosque sporting a 15-meter minaret (pdf). According to its website, Telfs has 15,000 inhabitants of which approximately 2,500 are of Turkish descent. Of the 2,500 Turkish-Muslim inhabitants, 65% are Austrian citizens. The official website concedes that their integration into the host society will most likely take many years. Due to the rapidly growing Muslim community and the presence of its two mosques there is a need for active inter-religious dialogue.

Temel Demir, an official of ATIB (Union der Türkisch-Islamischen Kulturvereine) and the initiator of the building of the mosque, says, “There are no problems between us and the Austrians.” He is right, because there is no interaction between them. Those who settled in Telfs in the 1960’s built their own infrastructure consisting of coffee houses, hairdressers, and supermarkets, where little or no German is needed. Turks and Austrians sit next to each other during school, but as soon as the bell rings they go their separate ways. It is in towns like these where parallel societies are most obvious, despite the continued denial of the Green parties everywhere. Whether in Berlin, in Cologne or in Vienna, as soon as Muslims demand the public display of their religious symbols, pub-goers will ask themselves: Why don’t you speak proper German after 40 years of living in Austria? Why can’t your children get jobs other than those in factories? Why aren’t your girls allowed to grow up and live the way our girls do? 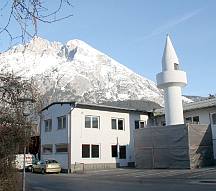 There was a lot of controversy surrounding the building of the mosque and its minaret. Even the members of the Greens felt uncomfortable, but it was ultimately the mayor of Telfs, representing the conservative party (ÖVP) who gave the green light and got death threats in return. Temel Demir says, “The minaret is benign, comparable to a church tower, just built with a small difference. It is definitely not a political sign.” The Muslim community had to make a promise never to call to prayer from the minaret.

According to statistics, 56 out of 148 children born in 2006 had Turkish parents. There are seven kindergartens in Telfs; all of them have groups where only half of the children speak German. The headmistress complains of Turkish parents who speak the local dialect and whose children don’t speak a single German word, saying they had also learned German in kindergarten.

The school’s headmaster also has tales of problems. “The situation is worse than ever before. No one knows the reality on the ground, not the state minister (the prime minister of an Austrian state, in this case Tyrol), not the chancellor, not the president.” He believes things will only change if and when the women finally learn German. “Maybe then these children will show interest in school excursions to Vienna or language trips or ski instruction courses.” Attendance numbers are at a catastrophic low. No money, parents say. The headmaster dismisses those words as an excuse.

To return to the story of the prime time movie: It’s a rather simple story revolving around an Austrian and a Turkish family, which included all the necessary clichés: The “evil”, “right-wing” Austrian warning about the dangers of “us mixing with them” on the one side; on the other side, the poor, almost angelic Turkish family, very traditional, the mother in her headscarf, her two girls in love with Austrian, non-Muslim boys, one of them murdered (and pregnant), her son and her husband in charge of all matters relating to the family’s honor. There is some discussion about honor killings and segregation of sexes. However, the end was disappointing: It was not an honor killing, but the victims’ friend who committed the crime, precisely because he wanted to prevent the mixing of Austrian and Turkish blood. At the very end of the movie, the Austrian and the Turkish father met in the mosque and “peacefully” sat next to each other.
– – – – – – – – –
It’s a pity that the movie never addressed the problems — actually the impossibility — of a friendship or relationship between a Turkish girl and a non-Muslim boy. None of the characters depicted in the movie discussed the Quran and its prescriptions for the relationship between Muslims and non-Muslims. The reason became clear during the panel discussion that followed the movie.

Preceding the panel discussion, however, there was a half-hour program called “Am Schauplatz” (“On the scene”), which reported on the deep division evident in Telfs between the native Austrians and their Turkish co-inhabitants. The viewer was taken to Turkish coffee-shops where not a single Austrian could be seen, but Turkish men and no women. The scene in a local, Austrian bar was as expected: men and women mingling, laughing, and when asked, commenting on the segregated society in Telfs. The camera also captured an apartment block where all tenants sport Turkish surnames. A local architect was interviewed in an empty office, explaining that he was forced to lay off all of his employees due to the lack of orders. No one is interested in building houses or apartments in Telfs; potential tenants always ask whether neighbors are Austrians or Turks, deciding that they would not invest in an apartment or house in a Turkish neighborhood.

The local FPÖ (Freedom Party) politician weighs in: “A minaret constitutes a sign of victory.” The Turkish population simply does not want to integrate into the local society: “They would rather take over the entire town”, he adds. The mayor of Telfs, on the other hand, has been called the “Turkish mayor” by many in the city because of his support for the building of the mosque with its visible minaret. The Turks, on the other hand, complain about the locals dealing with them as second-class citizens.

Anas Shakfeh slyly employed all means of his taqiyya repertoire, blaming any problem either on culture or on religion, but not on Islam. Felix Mitterer, the author of the movie, appeared utterly clueless, at one point addressing Shakfeh during a short wake-up time, when the theologian asked Shakfeh about Muslim marriages: “Now I understand why one of your secretaries contacted me and asked me to change the sexes of the main characters!” Mitterer apparently was unaware that a Muslim girl may not marry a non-Muslim man. Just when the discussion appeared to get underway regarding precisely this point, the priest interrupted to explain that he remembers Northern Ireland and how Catholic and Protestants were also unable to get married! When the priest also added that all religions had a common core (which one he kept secret), Shakfeh who was seated next to him, was a very happy and content man indeed! The so-called migration expert chimed in once in a while, saying that she wants to marry a man of her choosing. Shakfeh kept adding that while honor killings and forced marriages do happen, the Islamic faith community does not condone this behavior and does everything in its power to prevent this from happening. And anyway, “This is a cultural thing and has nothing to do with religion.”

The viewer certainly got the impression that there is no problem whatsoever in Austria between the local population and the Muslim immigrants. The Austrian Broadcasting Corporation, under total dhimmi control and riding on a wave of appeasement, neglected to invite a single person with a critical view. Thus, with the exception of the theologian, there was no dissenting voice to be found. The moderator tried to ask Shakfeh a somewhat controversial question, which Shakfeh answered in taqiyya-mode, which in turn satisfied the moderator. Utterly unsatisfactory and unworthy of a discussion. What an embarrassing evening! And dangerous, because the population is lulled into a false sense of normalcy.

3 thoughts on “Parallel Societies in Telfs”