Our Flemish correspondent VH has translated an article about recent threats issued by Al Qaeda against German cities. He includes this prefatory note:

The Mayor of Cologne, Fritz Schramma (CDU, Christian Democrat) who last year said that his opponents — the pro-movement — should be “flushed down the toilet,” has already found warm sympathy from the Antifa blackhoods, the militant Left, and Islamic fundamentalists. He may now add another kindred spirit to his list of soul mates: Al Qaeda.

Muslims threaten the citizens of Cologne 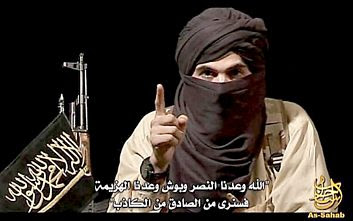 [Image caption: The video message on YouTube was online for only a short time, but the threat to the citizens of Cologne is clear: The Islamists are planning attacks in the city.]

Islamists have announced attacks in Cologne. The Muslim pictured above, who calls himself “a German” (!) and threatens the “world export champion”, expresses himself very clearly: “We will send an army into the midst of your cities, especially Berlin, Cologne and Bremen. Germany and four other countries will be in trouble from February 2009 onwards.”

A spokeswoman for the federal Interior Ministry said that a total of two messages containing threats have to be taken seriously: “Both videos fit our assessment that the jihadist propaganda against Germany has reached a new level. […] Germany is explicitly threatened in such messages, also in the German language and with German content. “

In the Islamist scene an increasing number of terrorists with experience in Germany are active, for whose large number we owe gratitude to our “tolerance” and multiculturally-oriented politicians. An Islamist from Bonn, Bekkay Harrach — who has previously threatened Germany in a video — is, according to findings of the German security authorities, a leading figure within Al Qaeda for the planning of terrorist attacks in Germany. Der Spiegel writes that Harrach nowadays calls himself “Abu Talha”, and plans and prepares attacks in a “Foreign Operations” section. He is thought to be in Waziristan in northwestern Pakistan on the border with Afghanistan, under the protection of warlords, and is also involved there in the planning of many regional attacks. According to a report in Der Tagesspiegel his threats focus on the federal elections in Germany this year.

Are we in Germany already that far gone, that Muslim terrorists are going to influence elections? — At least indirectly, due to their potential supporters, they are already apparently a factor of influence at the table where many policy decisions are being made. Only one thing can do prevent this: Stop the Islamization — Vote Pro-Köln!

3 thoughts on “Muslims Threaten the Citizens of Cologne”