In an exclusive interview published this morning by Right Side News, Alyssa A. Lappen talks to the Danish historian and author Lars Hedegaard.

Ms. Lappen says in her introduction:

On Sept. 15, 2008, the editor of Danish daily Berlingske Tidende summoned historian and columnist Lars Hedegaard to his office to lower the proverbial ax. He received a transparently suspicious explanation. “I’d been tedious and repetitive, and they needed younger people,” he said. “I thought, they’re not going to get me. There will be a record of what I’ve done these nine years.”

Within two weeks of its December 1 publication, Danish bookstores sold out two printings of Hedegaard’s Groft Sagt (“Roughly speaking”), a collection of 109 of his 2,000-plus columns for Berlingske Tidende. The book also includes 26 cartoons by Kurt Westergaard, 73, renowned for Jyllands-Posten‘s September 2005 Mohammed cartoons—-which the Muslim Brotherhood blamed for the January 2006 worldwide riots, murders and embassy attacks they instigated. But Hedegaard, too busy with two other book projects, does not plan to translate the work into English. 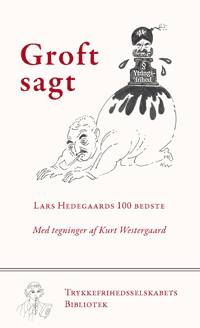 Overall, the press and Western leaders have had “ yet another missed opportunity “ to stand up “and call madness what it is,” in the words of scholar Robert Spencer. During World War II, however, Denmark was the only European nation to save virtually all its Jewish citizens.

In that Danish tradition, Hedegaard recognizes “the fragility of freedom.” In an exclusive interview with Alyssa A. Lappen, Hedegaard announced the December 21 formation of International Free Press Society (IFPS), following the lead of Denmark’s Free Press Society, established in 2004. The founders chose Hedegaard as their president, and Diana West as vice president. Among the organization’s Board of Advisers is Fitna producer Geert Wilders.

Below are some excerpts from the interview:

For the rest of the interview, plus a large selection of Kurt Westergaard’s illustrations, visit Right Side News.