From Snaphanen comes a report by Lars Hedegaard on yesterday’s demonstrations in Copenhagen. Visit Steen’s place to see all the full-size photos.

Supporters of Israel demonstrate in Copenhagen despite threats of violent attacks 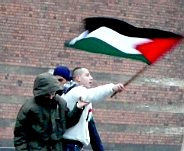 COPENHAGEN (Saturday, January 10). Around 500 supporters of Israel’s right to defend itself against terrorist attacks gathered in front of Copenhagen’s City Hall in a peaceful demonstration organized by the Danish Zionist organization. No doubt many more would have liked to be there, but as the President of the Danish Zionist Union, Max Meyer, explained to Danish TV2, he had been inundated with mails and phone calls from people who expressed their 100 percent support for the cause, but were simply too afraid to attend. And for good reason. A couple of days before the demonstration, a far-left grouping calling itself “the Gaza Initiative” had announced their intention to turn up with pictures of dead Palestinian children in order to “bring the war home on Danish ground”. 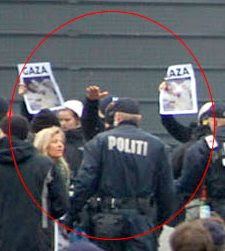 Had it not been for a heavy and very competent police presence, the demonstrators would no doubt have been attacked by a group of around 60 shouting and screaming Muslims and their Danish supporters that had gathered on the other side of the street. In a scene that has been repeated throughout the Western world over the past few days, these lovers of little children called for jihad and for killing the Jews, some raising their hands in the Hitler salute.

Similar scenes could be observed yesterday (Friday) in Aarhus as reported by the intrepid blog Uriasposten. Here a Danish Make Love not War segment from the far left, represented by among others the Socialist Unity List, had teamed up with Palestinian women carrying the Hizbollah flag and young Arabs shouting “Allahu akbar”, “Takbir” (expansion, conquest) and “We want war! We want war!”

Unfortunately, the journalists from the mainstream press must be hard of hearing, for the war cry did not find its way into their reports.
– – – – – – – – –
This should come as no surprise given the decidedly pro-Palestinian slant that totally dominates the mainstream media. Day after day they stick to the same theme: What can the “international community” do to curb Israel’s blood thirst? Why have the Israelis decided to kill innocent women and children? The fact that Hamas is openly bragging about their use of civilians as human shields has rarely been mentioned.

Nor has the fact that photographers have repeatedly been assaulted in both Aarhus and Copenhagen when they tried to take pictures of Muslim demonstrators. The same happened during the violent attacks on a small pro-Israeli demonstration in Oslo on Thursday.

Among the speakers at the pro-Israeli rally was Zionist leader Max Meyer. He expressed his regret that the war has resulted in many civilian casualties, but he emphasized Israel’s right to defend itself. “Hamas has wanted this war. Israel cannot and should not tolerate a movement that has openly declared its intention to wipe the country off the map,” he said. He went on to hammer the international community for its demands that Israel should simply accept a cease-fire while Hamas continues to shower Israeli civilians with rockets.

The foreign policy spokesman of the Danish People’s Party, Søren Espersen, reminded the demonstrators of the daily situation in Sderot and other population centers in southern Israel. He quoted Barack Obama’s statement that Israel had an obligation to take military action against Hamas terrorism when he visited Sderot a few months ago.

Southern Israel has been subjected to Hamas’ “infamous terrorist methods” since it withdrew from Gaza in 2005. The rockets leave the inhabitants 15-40 seconds to seek shelter day in and day out. It has come to the point where the children of southern Israel use the word “red alarm” as often as they say “mother” and “father”.

Among the speakers was also Frederiksberg City Councilor Pernille Høxbro, who is elected on the Conservative list. To the delight of the crowd, used to Conservative Foreign Minister Per Stig Møller’s PC criticism of Israel’s “overreaction” and his appeals for armistice at all costs, Ms. Høxbro minced no words: Israel is the only democratic state in the Middle East and we have a duty to support it. She also noted that Hamas is waging war on Christians and has killed women that have refused to wear the veil. 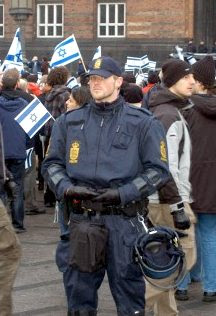 Another bit of Gaza reality that has been underreported by the Danish press.

True to form the counter-demonstrators embarked on a spree of vandalism and mayhem after the rally was finished. A mother and her child were dragged out of a car but rescued by police. Around 70 Hamas-supporters were arrested, many of them minors.

Only the courageous and vigilant Danish police stand between democratic civilization and a breakdown of public order. As did Berlin’s “green police” in 1932 — the year before Hitler took over.

Indeed the war has come home.