A Spanish reader named Hordley just sent us the following email about what happened today in Barcelona: 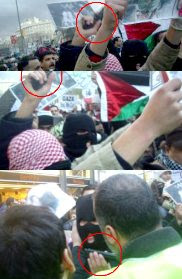 A gun was held in the air in a pro-Palestinian demonstration in Barcelona this afternoon.

The man holding the gun had his face covered and was right behind the placard that opened the demonstration.

The motto of the demonstration was “Stop the massacre in Gaza”.

It was supposed to be for peace but, in addition to this man showing a gun, the speeches were all violently anti-Israel and no mention was made about Hamas and Islam.

A great number of Muslims, mostly Maghrebins and Pakistanis, were present.

The rest of the demonstrators were all kinds of Communists and post-Communists.

Although the hysteria is stimulated by the media — especially Catalonian television, which is acting as a propagandist for Hamas — the majority of Catalans are aware of what’s really going and give support to Israel. Because its war is our war.

Links to the photos: