Update: The word “proportion” has finally made an appearance, in a Bloomberg article that refers to the opinion of an Israeli political scientist:

Within Israel, some questioned the scope of the action, suggesting it was out of proportion to Hamas’s provocations.

“The military move was a mistake,” said Galia Golan, a political scientist at the Interdisciplinary Center Herzliya north of Tel Aviv. “It is very terrible, way beyond anything that could be justified and I don’t think it will make a difference.” [emphasis added]

Let’s hear it for disproportionate response!

Our Flemish correspondent VH suggests that it might be time to revive my graphic from a couple of years ago. He points out that the quote from the spokesman for EU Foreign Policy Chief Javier Solana qualifies as a call for “proportionate response”:

“We are very concerned at the events in Gaza. We call for an immediate ceasefire and urge everybody to exert maximum restraint.”

Israel is routinely excoriated for violating the human rights of the Palestinians by building a wall or putting up roadblocks. This article from YNet News is a reminder of what “human rights” means to Hamas:

According to the report, the bill passed its second reading in the Gaza Parliament, by unanimous majority of three — the only three members of parliament who were present at the meeting.

Palestinian President Mahmoud Abbas is unlikely to sanction the bill, as required by the Palestinian law, but Hamas would have little problem implementing it in Gaza — which is under its complete control.

The bill is made up of 214 subsections. Section 59 states that “any Palestinian found guilty of raising a weapon against Palestine in favor of the enemy; countering Palestine’s interests in a negotiation with a foreign government; and placing Palestine’s existence in danger by committing an act of aggression against a foreign country… will be sentenced to death.”

A similar fate awaits anyone found guilty of the following: “Joining a foreign army fighting Palestine or facilitating such action; demoralizing the Palestinian people to any of its resistance movements; spying on Palestine or engaging in espionage during wartime.”

Section 84 stipulates that anyone found guilty of “drinking to making wine will be subjected to 40 lashes… drinking and harassing the public will be punishable by 40 lashes and three months in jail.”

The whip will be used on anyone “engaging in games of chance, offending religious beliefs and defaming others’ character,” as well. The bill also calls for dismembering — mostly of the hands — of anyone convicted of theft.

VH also included a link to this Google map in his email: 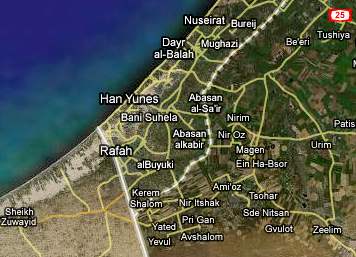 10 thoughts on “The Freedom-Fighters of Hamas”