To clarify the procedure for donating: scroll down and look for the “Tip Cup” on the left sidebar. Click that, and it takes you to the PayPal donation page for “Natural Intelligence of Central Virginia”. Follow the instructions, and make sure you include a note that your donation is for Fjordman. We will deliver the total proceeds to him at the conclusion of the Fjordman Fund drive.

Another ***bump*** for the Fjordman Fund.

During these past few days there have been generous donations from both the US and Europe.

As previous donors know, I believe that whatever one gives to another is always returned in abundance. This reciprocity is one of life’s Laws. Just as is the Law of Gravity immutable, so is the Law of Giving. Of course, what we get back in return for our gift doesn’t always come in the form we expect, but this just proves that the Cosmos, in addition to having a set of Laws, also has a Sense of Humor. This can be quite hard on the humorless.

To those who have given of their resources: thank you. For those just finding out about the fund, please give what you can in return for all that Fjordman has contributed to your understanding of what we are up against, and even more sadly, what we have lost.

The Dark Prophet of Norway has sometimes been vilified for telling the truth. That’s a professional hazard with prophets and with those courageous souls who pursue the freedom that truth brings. The Founders of the United States understood that point very well. They took a tremendous risk and had they lost, their lives would have been forfeit.

So it is with Fjordman, who writes anonymously in order to shine the light of truth into an increasingly ominous era.

Give what you can for what you have received. 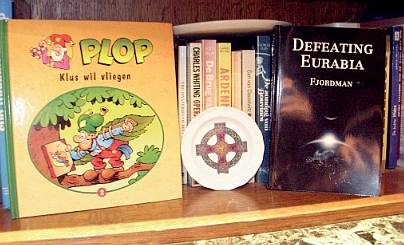 Further update from the Baron: The photo above shows Fjordman’s book proudly displayed on the bookshelf at the DowneastBlog.

Donations have been rolling in from all over the world — it’s very inspiring. Thanks to everyone for pitching in to help Fjordman.

This post has been bumped to the top, so scroll down to see Tuesday’s posts.

Note from the Baron: This post is being bumped to the top to make sure that latecomers and part-timers see it. Scroll down for all of the Monday posts.

The donations are coming in, and on behalf of Fjordman, I’d like to thank everyone who has contributed so far. 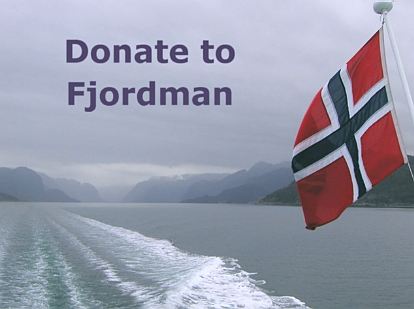 How long have you been a Fjordman fan? For the Baron, discovering the dark prophet of Norway was a good moment — February 2005.

That seems so long ago now, and actually it was — becoming a fan of Fjordman happened shortly after we began Gates of Vienna. The Baron mentioned with great enthusiasm a blog he’d found by “this Norwegian guy”. We put it on our reading list along with Wretchard at Belmont Club. There were others — Bill Whittle was one.

I finally got around to buying Bill Whittle’s book; it’s very good — written in that inimitable style of his. Wretchard hasn’t put a book out yet, but when he does, I’ll be in line for that one, most certainly.

The case with Fjordman is somewhat different. After the span of years Fjordman spent creating his essays, he has written a book. The problem is, the publishers have made Defeating Eurabia expensive. Purchasing it is a major outlay of cash in a bad economic time, and especially since he won’t be seeing any return for this venture.

Fjordman wants to sell the book in order to disseminate the information he has collected. He published it in order to have those essays all in one place, bound between two covers. But it has continued to bother me greatly that he will receive no recompense for this most extraordinary work.

For some time I have been badgering Fjordman to permit me to put up this bleg.

It’s not his idea. However, the idea wouldn’t let me alone, so I pestered him until I got permission to ask our readers to donate to his cause. Will your generosity keep the wolf from the door? Probably not — but it sure will keep the old grey guy from getting inside.
– – – – – – – – –
Here’s how the bleg will work: donors to Fjordman will send their contributions through the Gates of Vienna PayPal site. We will in turn send each acknowledgement on to him so that he knows who his donors are. This will permit him to respond to each of you individually, and it allows you to ascertain that he did receive the money.

During the week, I will bump up this post, with updates. I hope to gather donors from a wide group of countries and be able to report those to you during the course of the donation drive. When the bleg is over, we will pass the collected monies on to a third person who will make sure Fjordman receives the full amount.

All of this will take a bit of work. When your donation comes in, I expect to have it forwarded to Fjordman on that same day. He in turn, may have to take several days to respond to you. If you haven’t heard from him personally within 72 hours, then email us about this. Email is preferable to comments as it is more likely to be seen by one of us.

Because it is so over-used, “unique” is a word I normally avoid. However, I cannot think of anyone else in the blogosphere (or academia or journalism, for that matter) who can convey this broad expanse of knowledge and understanding in the way that Fjordman has done, and continues to do. His ability to place people, events, and even technological innovations in their proper perspective has demonstrated repeatedly the scope of his scholarship. There is simply no one else out there doing what he does.

And of course you know his output is prodigious. I wish I had half his intellectual energy, never mind his ability to convey what he knows with such clarity. Fjordman remains remarkable, just as fresh as he was when we first happened upon him almost four years ago.

I hope you can contribute to the cause of this extraordinary thinker. Years from now, people will look back on his work, both the quality and quantity, and marvel at how he managed to accomplish so much. They will wonder too, at his prescience; I fear the things he has predicted will come about even sooner than he thought.

For those of you who want to read it online, Fjordman’s book Defeating Eurabia is available in five installments:

35 thoughts on “The Fjordman Fund, Continued”