The aftershocks from last month’s terror attacks in Mumbai are still resonating throughout the region and the rest of the world. Both India and Pakistan have been ratcheting up their preparations for war, but it looks like Pakistan has blinked first and is calling for a hudna:

Pakistan has again called for an easing of tension with India in the aftermath of the Mumbai attacks, saying dialogue would benefit both sides.

While the world’s attention is focused on Israeli airstrikes in Gaza, the Jews who bore the brunt of one of the attacks in Mumbai are determined to restore their building. Nariman House, the Chabad-Lubavitch center in Mumbai, is the place where Jewish hostages were taken, held, tortured, and murdered. In the process the building was severely damaged, but the Jews insist that they will not allow it to be destroyed.

According to the Mumbai Mirror:

Restored Nariman House is our reply to all terrorists

Israelis say they won’t allow demolition of Nariman House; it will now become a symbol of their resistance to terror attacks 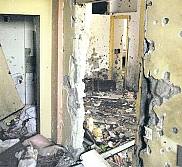 After three days of sustained shelling and grenade attacks, Nariman House at Colaba, the site of last month’s terror strike, has been reduced to a shell almost. But the Chabad-Lubavitch movement that ran the Mumbai centre from there is determined that the building will not be pulled down. Instead, say the Jews, they will restore and preserve the building as a symbol of their resistance to terrorism.

On Tuesday, a demolition team from Brihanmumbai Municipal Corporation (BMC) that went to break the damaged sections of the building had to come back after breaking only the compound wall which had been left in a precarious state after the attack. The BMC team was not allowed to enter the debris-filled rooms by members of the Jewish sect.

Members of the orthodox Chabad-Lubavitch order who have now taken charge of the building said that since the central structure of the five-storey building is more or less intact, the building need not be demolished because the Jews now have sentimental attachment to the building. The centre’s director, Rabbi Gavriel Holtzberg and his wife Rivka were among those who died in the attack.

Levi Jurkowicz, an official from Chabad-Lubavitch who has been in charge of the building since the last few weeks said, “We are not scared and we will not go back to Israel. Nariman House has become a building with lot of symbolic importance for us. We are emotionally attached to this building. We will not demolish this building. It will be repaired and restored to its old state.”

“By restoring and preserving Nariman House, we will give a befitting reply to the extremists who wanted to frighten us,” Levi added.

“Once the building is brought to its original state, our people will come and stay here without any fear.”

The staircase of the building is badly damaged and several walls have developed huge cracks. But a structural audit by the BMC has said that the building is structurally sound and there is no need to pull it down. A team of seven experts from Mahimtura Consultants Pvt Ltd had completed their survey last week.

A BMC official who was part of the team that went to the building yesterday said that in addition to the staircase, the fifth floor was the worst affected. “Many walls have developed cracks. The entire building is in a mess,” he said.

Most of the damage to the building was caused by grenade explosions. The aluminium windows and doors were damaged by bullets. “We demolished the compound wall that had developed a tilt. The neighbours were worried that children who play in the lane could get injured by the wall. Levi did not allow us to clear the debris inside,” said the civic staffer.

There were two major explosions on the last day of the siege: one broke the windowpanes of the fourth-floor flat and the other that created a gaping hole in the wall of the third floor and at the fifth floor, bear witness to the long battle between the terrorists and NSG commandos. Levi said that the BMC should not waste the public tax payers on their building. “It should be utilised to help needy people.”

A notable difference between the Jewish victims in Mumbai and those of southern Israel is in the randomness of their selection. Rockets are fired indiscriminately into Sderot and Ashdod, and strike their victims by chance. But the targets at Nariman House were carefully singled out from among the millions of inhabitants of Mumbai.

In other Gaza-related news, Iran is planning to put the Israelis on trial:

Iran has set up a court to try Israelis for its air attacks on Gaza and is ready to try in absentia any people who Tehran says have committed “crimes,” a judiciary official said on Tuesday.

Iran, which does not recognize Israel, has criticized some Arab states for not doing enough to stop military action by the Jewish state.

“The court is in a special branch in Tehran and entrusted with the task of dealing with the executors, planners and officials of this (Israeli) regime who have committed crimes,” judiciary spokesman Alireza Jamshidi said.

One niggling detail: the extradition of the defendants to Iran may pose a slight logistical problem for the mullahs.

2 thoughts on “Meanwhile, on the Eastern Front…”