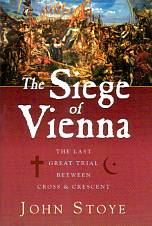 I’m in the process of re-reading The Siege of Vienna: The Last Great Trial Between Cross & Crescent by John Stoye. Stoye’s work is the comprehensive account in English of the events of 1683. I’ve been told that much more detailed and extensive material on the topic is available in German, but for monoglots like me, Stoye is the best resource. I highly recommend the book.

In the last four years of blogging this topic, I’ve become increasingly sensitized to the nuances of the struggle against the Great Jihad, and more alert to the parallels between Europe in 1683 and our own time. Just before Kara Mustapha launched his attack on Vienna, the states of Western Europe were busy squabbling among themselves, planning military adventures and plotting intrigues as if there were no danger to their east.

Unlike their Christian neighbors, for the kings and princes of Europe the Mohammedans were an alien culture, and not well understood. Therefore they chose to treat them like the weather — an unpredictable and sometimes dangerous phenomenon, but nothing to interfere with the conduct of business as usual.

The excerpt below, from page 7 of The Siege of Vienna, describes the social and political context of the Ottoman Empire as the Sultan and his Grand Vizier prepared their grand assault against the Habsburgs:

One or two far-seeing Moslem writers of the seventeenth century contrasted unfavourably the working of contemporary Ottoman institutions with what they believed was the sounder practice of earlier periods. It is more important to take into account the conventional opinion of their day. For the plain man, accepting without debate the structure of human society as it existed, the frame of government provided by the great empire of the Ottoman Sultan seemed indestructibly part of the nature of things. Its splendour, and strength, far overshadowed the current tribulations of humanity within it. Anyone who cares to browse, for example, through the writings of the traveller Evliyá Chelibí, son of a prosperous Istanbul goldsmith who crossed and recrossed the Moslem world in a long sequence of journeys between 1640 and 1670, will be left with a vivid impression of his complete sense of confidence. No city, in Evliyá’s experience, could approach the magnificence of the Istanbul he so lovingly describes: its palaces and places of worship, its educational establishments and hospitals, its plethora of the guilds of skilled craftsmen. Nothing could detract from the glory of those marvellous conquests which the sultans of his own day, Murad IV and his two successors, had made in various parts of the world. They were worthy of Selim the Cruel and Suleiman the Lawgiver. Look up his account of the gun-foundry and its workmen in the capital, and of the topjís, or artillerymen: who could doubt that both were incomparable in their own line of business?

Read his description of the siege by the Turks of Azov in 1640: the reader must believe that such a partnership of Moslem courage in battle with massive military organisation was, and would always be, superior to the efforts of any enemy. Besides, victories brought their due advantage to the brave adventurer. Evliyá tells of the booty distributed, of his own share of slaves and furs and other valuables; it was the traditional, practical motive for Ottoman militancy from the Sultan or Vezir down to the dingiest camp follower. In this valuable and conventionally minded author there is not the slightest hint of a ‘failure of nerve’, no inkling of living mainly in the shadow of past Moslem achievements.

If the Turks were living in “the shadow of past Moslem achievements” in 1683, just think how deep and long that shadow must be by now. In 1683 the Ottoman Empire was just barely lagging behind Western Europe in technology and military organization, and was its equal in economic terms. In the three centuries since then, the entire Muslim world has fallen three centuries further behind the West, and without the petroleum windfall would be unable to sustain any functional political economies whatsoever.

But, as Stoye points out on page 9, the response of Islam to decline and decay is to become even more Muslim:

The state was becoming more obstinately Moslem in personnel and outlook. This is one comment that may be made on old Evliyá’s view of the Ottoman empire’s continuing glory. Other fundamental changes, which he could hardly be expected to grasp, were also taking place.

The fundamental changes that were underway in 1683 would lead to the Grand Vezir’s rout before the gates of Vienna and the long retreat of Islam from Europe.

The fundamental changes that are underway right now are at least as large as those of the 17th century, but none of us understands them well enough to predict the final outcome of the current conflict.

As I work my way through The Siege of Vienna, I’ll post further excerpts here, as time permits.

5 thoughts on “Living in the Shadow of Past Moslem Achievements”