The forces of Political Correctness are at work again, busily eradicating the “racist” traditions of European culture. In Belgium, Sinterklaas is in the crosshairs — in fact, the cross on his mitre is what has to go. Here’s the story from DowneastBlog:

I have the good fortune of having a sister who is so kind hearted towards children (perhaps because she hasn’t them of her own) that she organizes a Santa Claus evening every year for the extended family on which she hires the services of a “professional” Sinterklaas together with one Zwarte Piet. There’s a number of couples among us with children still small enough to believe in the Holy Man descending from chimneys and handing out the rewards for not having been (too) naughty. So this evening, we off to my sister’s home somewhere in Belgium’s northwest. 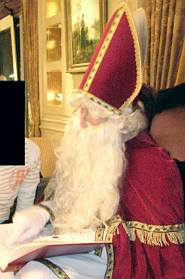 I took the following pic when it was my daughter’s turn to listen to Sinterklaas’s lecturing on her behaviour throughout 08.

Something was different on his mitre. Something that was not there during the same celebration one year ago, or in the preceding years.

Look at his mitre.

The cross was gone.

When the “performance” was over, Sinterklaas quickly disappeared, together with his Zwarte Piet, before I had the occasion to ask him some questions about his wardrobe dysfunction. However, he did exchange some words with my brother-in-law, who had hired him in the first place, and afterwards the latter told me the “Sint” (abbreviation) had confided to him that the organization which dispatches the Santa Clauses (remember, these are “professionals”) had received instructions to remove the crosses from their mitres in order “to be less offensive”. Which institution had given the instructions my brother-in-law could not tell me. However, even more frightening was the news that at least in certain neighborhoods of Antwerp the ceremony had been forbidden altogether in several schools.

But Vlaams Belang is not taking these insults lying down. We just received this in an email from Paul Belien of the Brussels Journal:
– – – – – – – – –

Here is a picture of Santa Claus (Saint Nicholas, Bishop of Myra) in the traditional costume which he wears in Flanders and Holland: 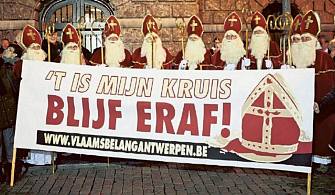 Muslims have objected to the cross on his mitre and the Antwerp city authorities decreed that the Saint, while visiting Antwerp schools to hand out sweets, had to remove the cross from the mitre.

Yesterday evening, the Vlaams Belang demonstrated in front of the Antwerp city hall with ten Santas, bearing the slogan: “ ‘t Is mijn kruis, blijf eraf.”: Keep off my cross (literally: It is my cross. Keep off it).

Belgium is not the only country where this sort of nonsense has become official policy. The Daily Mail reports that the authorities at one of Her Majesty’s penal institutions have been ordered to remove a crucifix from the prison chapel.