The post below grew out of an email exchange with several interested parties, some of whom are concerned about the recent accusations against Vlaams Belang.

I say “recent”, and not “new”, because none of the material is current, and all of it has been seen before and discredited. But the hard Left in Belgium is relentless, and has suckered parts of the American blogosphere into swallowing these stories hook, line, and sinker.

Vlaams Belang is being held to a ridiculously high standard of evidence that no other mainstream European political party has to meet. No other party — not the Socialists, the Christian Democrats, the Communists — has to publicly refute and disprove every bizarre lunatic accusation made by dishonest shills with a partisan axe to grind. 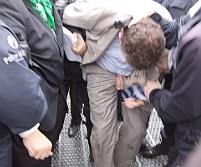 Other parties can ignore wild-eyed accusations from the fringe. But let someone allege a VB Nazi salute or a VB neo-Nazi book fair, and Vlaams Belang is presumed guilty until it proves itself innocent — which it never really can.

Then the next day there is another bogus accusation, and the whole farce begins all over again.

So when one of these Yelloman or EXPO types issues yet another VB smear, we are “troubled” and “concerned” and hope that Vlaams Belang will “refute these accusations”.

WHY???
– – – – – – – – –
Why waste our time with these endless refutations? They suck up thousands of man-hours, achieving nothing. So far all we have seen is the same spurious junk recycled and repackaged for next round of “revelations”.

Once again, no other European party is forced to dance the “We’re-not-Nazis” two-step every day of the week. Only Vlaams Belang.

The hard Left has orchestrated this little game, and we are suckers for falling into their trap. They have us right where they want us — chasing all these Nazi spectres down dark alleys to try to make them disappear. Every day the leftists release another one from their patented Nazi Spectre Generator™, and off we go a-haring after it.

For the sake of people I care about, I will do what I can to aid the process of refutation. But I think it’s a mug’s game.

In my opinion, Vlaams Belang proved its bonafides face-down and surrounded by jackboots in Schuman Square on September 11th, 2007.

That was good enough for me. We could see quite clearly who the real “Nazis” were in that charming tableau.

10 thoughts on “The Vlaams Belang Standard”