Our Austrian correspondent ESW sent us the following report on the recent award of a democracy prize to an Austrian Muslim group:

Margarethe-Lupac-Prize for Parliamentarism and Democracy 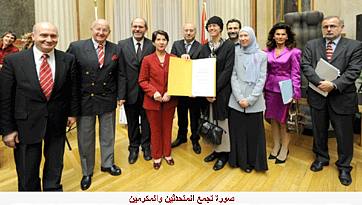 This year the prize for democracy, awarded biannually, was given to the Muslim Austrian Initiative, which announced that

We are striving for a positive social change in which social values should be anchored in greater general awareness. We (see it as our duty to) promote the social participation of Muslim citizens in the sense of general well-being in that we are open to various initiatives and directions. In this project both men and women who have adopted Islam, as well as migrants who were born Muslims and have found a second home in Austria, work together in a democratic way. We are witnessing the coming together with friends from other cultures and religions or beliefs as a very positive experience. With the help of our different professional backgrounds we can competently respond to specific issues. We are familiar with Austrian cultural structures and are insiders in matters relating to Islam and its cultural manifestations. This gives us a (special) role as mediators between religions and cultures which we would very much like to realize.

These words are outrageous. The fact that the award was given to a prominent Muslim group which includes the well-known Omar Al-Rawi and Carla Amina Baghajati, among others, can and must be considered a slap in the face, the ultimate slap, in the face of a democratic society.

“Do not talk about Muslims, but with them,” is a key theme of the initiative, which aims to boost social, political and cultural fields and to build bridges.

“The innovative media work of the organization is noteworthy; projects supporting equality specific to women, but also equality between women and men; the Open Mosque and school projects with dialogue sessions for students, but also for teachers and training sessions for the police force. I am particularly pleased that a new project in collaboration with the other recipient of the prize, the European primary school, was launched: a nice sign of the sustainability of the Lupac Foundation.

“A significant proportion of migrants are Muslims who come from countries with Islamic traditions. Islamic diversity has been brought to Europe in recent decades and it has also become a sizeable factor in Austria. Meanwhile, three generations of migrants have been living here and thus the “guest status” should be overcome. Immigrants have become an important part of the cultural, social and political life.

“The liberal constitutions in Europe form wide open spaces for individual life. Among the essential basics are respect for human dignity, democracy and the rule of law, separation of powers, majority rule, and the protection of minorities, as well as fundamental rights, such as gender equality, freedom of expression, belief and religion, and the protection of private and family life.

The last paragraph especially should have made the recipients shudder, or, which is more likely, made them jump up and down for joy on the inside. All these liberties mentioned by the vice-president of the constitutional court are precisely those that Islam is not compatible with, that Islam deplores and seeks to get rid of every single day, in every single non-Muslim country.