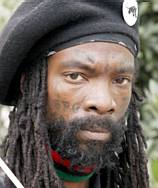 The man in the photo at right is displaying what’s colloquially known as a “’tude”: an attitude of smoldering anger towards the world in general, and — in his case — against the white people of America in particular.

He’s Minister King Samir Shabazz, the leader of the Philadelphia chapter of the New Black Panthers. His goal, proclaimed emphatically, repeatedly, and publicly, is to destroy white people.

So is he a racist?

No. He can’t possibly be one, because he’s a member of a historically oppressed group, and only members of the privileged elite oppressive majority can be racists. If his organization succeeds in its goal and destroys white people, leaving the surviving remnant a minority in the land, perhaps then his program would become “racist”.

But don’t bet on it. I expect that there would have to be a waiting period of several thousand years to make up for their past transgressions before white people could ever claim victim status in Minister Shabazz’ brave new world.

Just as a matter of interest, he’s no fan of Barack Hussein Obama. From the point of view of Minister Shabazz, the Messiah of Hope and Change is a traitor to his race, a puppet for his white masters.

Some people wear their heart on their sleeve.

Minister King Samir Shabazz wears his on his forehead. Right between the eyes.

“If you want to stop the revolution, that’s what you got to hit,” Shabazz said, pointing to the target tattooed onto his forehead. “I fight my oppressor, and I give him the target.”

Shabazz is chairman of the New Black Panther Party’s Philadelphia chapter. In black beret atop dreadlocks and a black military uniform, he spends most weekdays near City Hall condemning “crackers” and exhorting black passers-by to rise up against their “slavemasters” — and to give him $2 for the party’s semi-annual newspaper.

Hmm… I’m not sure how baseball got mixed in with all the violent revolutionary politics.

He’s 38 and has children, but he won’t say how many or provide any more details about his personal life, partly for security reasons but also because this reporter is a “cracker.”

He listens to “revolutionary, cracker-killing hip-hop” on his headphones and says things like: “I’ll get black to you on that.”

And he says that he never worries what response his violent rhetoric might provoke in listeners.

“You got to take violence to violence.”

This is an extreme example of classic ghetto mau-mauing, designed to make a shiver run up the effete spine of the average suburban dry-Chablis-and-runny-brie honky.

But this is Philadelphia, home to MOVE, and the city has a history of violent revolutionary black liberation movements, groups that are too far off the scale for even ACORN and Jeremiah Wright, not to mention Barry Soetoro.

I think these guys mean business.

28 thoughts on “The Total Destruction of White People”