Although Denmark was occupied by the Germans during World War Two, the Danes resisted Nazi attempts to deport the country’s Jews to the extermination camps. Most of Denmark’s 7,000 Jews were successfully protected or else escaped to Sweden. 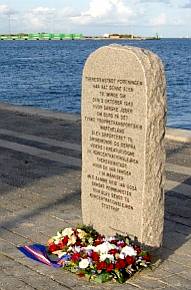 We have just passed the 65th anniversary of the deportation of several hundred of Denmark’s Jews to German concentration camps. A new memorial was erected for the occasion at the location from which the SS Wartheland set sail with its prisoners.

Here’s what Steen had to say when he sent me the photo at right:

My Jewish friend just send me this photo of a new memorial erected at this place, where the few Jews that did not escape the Nazis were deported to Stutthof and Theresienstadt.

He also referred me to this account in the Baltic Eye :

The night between October 1 and 2 the German police and the Danish Schalburg SS-unit arrested all Jews to be transported to the steamer Wartheland with capacity for 5000 prisoners. Some poor Jews had escaped persecution in Germany, now persecuted again in Denmark.

In reality “only” 481 Jews were captured, and deported to the ghetto in Theresienstadt.

Many escaped. In Copenhagen some hid in the Ørsted Park near the Municipal Hospital, some in the woods.

The escaped Jews were helped to escape to freedom in Sweden with illegal fishing vessels from more than 25 different secret places, most in Øresund.

Here’s another account of the anniversary and the events it commemorated, as published in Haaretz:

Rosh Hashanah of 1943 was supposed to be the date when the Jewish community of Denmark would be terminated. Toward the end of September, Adolf Hitler had ordered the 7,000 Jews in Denmark be arrested and sent to concentration camps in Eastern Europe.

The operation was scheduled to begin on October 2, at 10 A.M. It was one of the first Nazi interventions in Denmark since they occupied the country three years previously, years in which the Danish parliament rejected the anti-Semitic decrees passed around Europe, and after a summer of intense activity by the local resistance. Now the Jewish community was going to pay the price.

Ellen Oppenhejm, who was 17 years old at the time, knew about the plan in advance. The German naval attache in Denmark, Georg Duckwitz, had secretly informed the heads of the Danish Social-Democratic party of the plan, and they had passed the information on to the heads of the Jewish community. The Oppenhejms received the news on time, left their house before October 2 and took refuge with non-Jewish friends in Copenhagen. Other Jewish families were hidden in churches and hospitals.

On the night of October 1, the Oppenhejms tried to sail to nearby neutral Sweden. “We reached the Danish coast before midnight and found an empty row boat,” Ellen Oppenhejm recalled yesterday in a telephone conversation. She boarded the boat together with her parents and four other Jews, but their attempt to reach Sweden failed. “Water seeped into the boat and we couldn’t steer it. A morning fog obscured the coastline and we did not know which way to go. A ferry sailing from Sweden to Denmark picked us up.”

The captain of the ferry locked them in a cabin and informed the German authorities that he was returning a group of Jews to Denmark. “My Dad tried to appeal to his heart to let us return to our boat, but the captain refused,” Oppenhejm said. “My Dad returned to the cabin and my Mom prepared a potion of morphine prepared by a doctor friend in case we were caught by Nazis and chose to end our lives. It was awful and I cried. I was just 17. I remember thinking I was too young to die.”

But the Oppenhejms’ lives were saved, together with the vast majority of the Danish Jewish community, in one of the most impressive operations to protect Jews carried out during the Holocaust…

One thought on “The Rescue of the Danish Jews”