The association of Bosnian Muslims with Hitler’s Nazi regime is well-documented, and we have reported several times in this space on the Grand Mufti of Jerusalem, Mohammad Amin al-Husayni, who collaborated with the Nazis and helped organize a division of the Waffen SS made up of Bosnian Muslims. Al-Husayni was a respected leader of the Arabs, and was revered by Yasser Arafat — who is rumored to have been the cousin of the Grand Mufti. 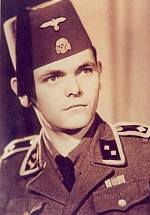 The Handzar (or Handschar) Division of the SS was deployed mainly in the Balkans to help keep control of occupied Yugoslavia, which was not easily pacified. Along with the Croatian fascist Ustasha, the Handzar Division launched extremely brutal operations against the Serb partisans who were resisting the Germans.

Everything has changed since then, and now the Serbs are the evil ethnic cleansers of the Balkans, and the Muslims are their innocent victims. All that Handzar Division stuff is ancient history, and has been forgotten.

According to an article by Carl Savich in Serbianna, the Handzar Division was deliberately and explicitly revived during the 1990s during the fighting in Bosnia:

Description of the magazine cover depicted at right (click to enlarge): Bosnian Muslims in Sarajevo threatened to reform and to revive the Bosnian Muslim Nazi SS Division Handzar and to cut off the heads of Serbian leaders. The cover of Novi Vox magazine, October, 1991 with the headline: “The Handzar Division is ready!”

The Bosnian Muslim Government and Army of Alija Izetbegovic reformed and revived the Bosnian Muslim Nazi SS Division from World War II. This startling fact was first revealed by British journalist and military analyst Robert Fox in the Daily Telegraph news report from December 29, 1993. The report was entitled “Albanians and Afghans Fight for the Heirs to Bosnia’s SS Past” and was reported from Fojnica in central Bosnia. This was one of the most remarkable stories to emerge during the Bosnian civil war. The Bosnian Muslim Government and Army had reformed a Nazi SS Division right under the eyes of the U.S. and Western media. And only Robert Fox caught it. That is a remarkable example of media censorship and collusion to cover-up the facts. And this was accomplished the U.S. and Western media.

This story started when Robert Fox went to investigate the horrific murder of two Roman Catholic priests in Fojnica. Bosnian Muslim Army troops had executed two priests, Nikola Milicevic, 39, a parish priest, and Mato Migic, 56, a vicar, were Franciscan priests who had been murdered by Bosnian Muslim soldiers at the Holy Spirit monastery, execution-style. While investigating this war crime, Fox soon discovered that the Bosnian Muslim Army had reformed a Bosnian Muslim Nazi SS Division from World War II, the 13th Waffen SS Division Handzar or Handschar, “dagger”, which is derived from the Arabic word khanjar, the term for a curved, double-sided Ottoman knife prevalent in Arabic and Muslim countries.

This is how Fox described his encounter with the reformed Bosnian Muslim Nazi SS Division:

“‘DOCUMENTS!’ shouted a man in a beret with an insignia in green Arabic script outside the UN house in the Bosnian mountain town of Fojnica. He was hostile and demanded our presence at the police station.

“Later the police chief apologised, but made clear that authority had passed to the men with the Koranic texts hanging from their fatigues…

“These are the men of the Handzar division. ‘We do everything with the knife, and we always fight on the frontline,’ a Handzar told one UN officer.

“Up to 6000-strong, the Handzar division glories in a fascist culture. They see themselves as the heirs of the SS Handzar division, formed by Bosnian Muslims in 1943 to fight for the Nazis. Their spiritual model was Mohammed Amin al-Husseini, the Grand Mufti of Jerusalem who sided with Hitler.”

Fox personally observed that Albanian Muslims were part of the recreated Handzar Division, which was also made up of veterans, mujahedeen, from Afghanistan and Pakistan. Fox regarded the presence of Albanian Muslims in the division as evidence that the conflict would spread to Kosovo, which Albanian Muslim separatists sought to detach from Serbia and to create a Greater Albania.

How was this event missed by the mainstream media? Why was Robert Fox the only Western journalist to report on the reformed Bosnian Muslim Nazi SS Division? What does this cover-up and media censorship reveal about the U.S. and Western media?

The Bosnian Muslim faction had threatened to reform and to recreate the Handzar Nazi SS Division. In October, 1991, the Bosnian Muslim magazine Novi Vox in Sarajevo, in issue no. 3, well over half a year before the civil war broke out in 1992, published a front-cover illustration showing a Bosnian Muslim Nazi SS officer in the Handzar Division stepping on the decapitated and bloody heads of Serbian leaders, including Bosnian Serb leader Radovan Karadzic. The caption read: “The Handzar Division is ready!” Another headline announced: “The Fourth Reich is coming — Welcome!” This revival of Bosnia’s Nazi and SS genocidal past was censored, suppressed, and covered-up in the U.S. and the Western media. But the Bosnian Serb population got the message very clearly.

The original news account by Robert Fox in the Daily Telegraph was dismissed and rejected by the mainstream media. The news account was de-emphasized, not totally censored. Everyone missed the story. Marko Attila Hoare even argued that there was no evidence for the recreation of the “Balkan Islamofascist Division” in “Monty Python and the Balkan Islamofascist Division.” Hoare claimed that evidence for the reformed Nazi SS Division was “based entirely on Fox’s article” and dismissed the story about the “alleged reincarnation” of the Handzar Division. Hoare heaped scorn and ridicule on Fox and anyone who gave credence to the news report and maintained that “Monty Python is a much better source for accurate historical information.” Hoare used terms like “it is conceivable” and “alleged” and “supposedly recreated Handzar division.”

In short, the alleged recreation of the Handzar Division is merely “a popular myth of the anti-Muslim lobby.” Hoare then stated that “no other journalist or anyone else seems to have noticed the existence” of the reformed Handzar division, implying that it was untrue and that the recreated Nazi SS formation did not exist. Fox was merely retelling hearsay, second-hand rumors and nonsense. Hoare implied that no evidence or corroboration existed for the reformation of the Handzar SS division. The only evidence was “a single newspaper article written by Robert Fox” according to Hoare.

But is this really the case? Is there no factual evidence or corroboration to substantiate the existence of a reformed and recreated Nazi SS Division by the Bosnian Muslim Government of Alija Izetbegovic? Is Monty Python’s Flying Circus and a comedy sketch from 1970 about “Mr. Hilter” and “Heimlich Bimmler” and “Ron Vibbentrop” a much better source for accurate historical information and scholarship and factual analysis?

Read the entire article at Serbianna for all the detailed documentation — drawn from the International Criminal Tribunal for the former Yugoslavia — on the updated version of the Handzar Division.

It appears as though the existence of the reformed Handzar Division was not much of a secret. It was only a secret to the befuddled, lost, and delusional Hoare. This is what occurs when Monty Python’s Flying Circus is the source of your historical research. Hoare should spend more time on analyzing the war crimes trials at the Hague and less time on watching dated TV reruns. Moreover, for history to have any value or merit, objectivity and neutrality must be the goals. Delusional fantasy and ideological propaganda constructs have no place in serious scholarship and history. Monty Python should not be the source for historical information on the civil wars in Bosnia-Hercegovina.