A picture is worth a thousand words, but a political cartoon is priceless. Especially a cartoon containing “racist” “socialist” warning signs. 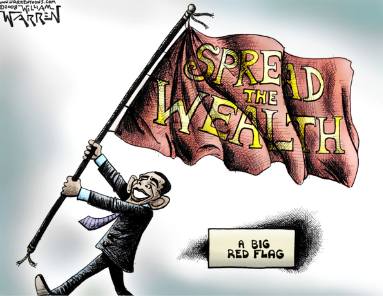 Obama is currently angry at Fox News for digging up an old Chicago Public Radio interview in which he voiced regret about the civil rights movement’s shift towards court solutions and away from what he considered the real goal: income redistribution.

And there I was back then, thinking our fight for civil rights for blacks was about deserving a place at the table, that our goal was an equal opportunity to strive without the artificial and cruel restraints regarding skin color.

Here’s the Obama campaign’s lash-out at Fox and the other usual suspects (except for Rush Limbaugh who somehow missed the cut on this one):

In the interview, conducted by Chicago Public Radio in 2001 while Obama was an Illinois state senator and a law professor at the University of Chicago, Obama discusses the failure of the Supreme Court to rule on redistributing wealth in its civil rights decisions. The unearthed conversations gave fresh ammunition to critics who say the Democratic presidential candidate has a socialist agenda.

But Obama spokesman Bill Burton on Monday accused FOX News of pushing a “fake news controversy” to further an agenda. Though FOX News played the audio tape for its viewers and did not just recap Republican criticism, Burton suggested FOX News was conspiring with the McCain campaign and the Drudge Report, which posted the material on its Web site.

No wonder the O campaign is kicking. The Big One laid a big one in this interview. But in 2001, he never dreamed he’d be running for president so soon, do you think?

In the radio interview, Obama delved into whether the civil rights movement should have gone further than it did, so that when “dispossessed peoples” appealed to the high court on the right to sit at the lunch counter, they should have also appealed for the right to have someone else pay for the meal.

No, I’m not making this up. He really did say that.

See why his handlers are trying to discredit the messenger? See why he’s waving the big red flag up there?

Obama said the civil rights movement was victorious in some regards, but failed to create a “redistributive change” in its appeals to the Supreme Court, led at the time by Chief Justice Earl Warren. He suggested that such change should occur at the state legislature level, since the courts did not interpret the U.S. Constitution to permit such change.

“The Supreme Court never ventured into the issues of redistribution of wealth and sort of basic issues of political and economic justice in this society, and to that extent as radical as people try to characterize the Warren Court, it wasn’t that radical,” Obama said in the interview, a recording of which surfaced on the Internet over the weekend.

“It didn’t break free from the essential constraints that were placed by the founding fathers in the Constitution, at least as it has been interpreted.

To which I can only respond, thank heavens it hasn’t “shifted” or we’ll all be shafted, including those people Obama wants to make special. Maybe especially those folks.Public greed is not treated kindly by the average American.

Obama has been fortunate that his wishes didn’t come true back then, or he wouldn’t be running for anything now. It can be a terrible thing when you get what you wish for, especially when you are wishing for it on the behalf of others.

Funny thing about the Democrats: they are simply unable to learn from the mistakes of the past. In fact, they don’t even see them as mistakes.

It would be a tragic day for America if her Constitution were ever to bear the burden of any amendment of entitlement.