As a result of the current financial crisis and the recent bailout, we have reached a historic milestone: The people of the United States have finally paid reparations to the descendants of African slaves.

Admittedly, it was a stealth form of payment. It wasn’t a straightforward check written from the Treasury to the people involved. The voters weren’t consulted about the arrangement. It was something that just kind of happened.

Members of Congress didn’t actually vote for legislation ordering reparations — not as such. What they did was cobble together a “Christmas tree” of a bank bailout bill, one larded down with so much pork that it was guaranteed to squeak by and be signed by the President. No incumbent politician stood to benefit from a complete financial meltdown, so the Senators and Congressmen voted for the bailout in an attempt to save their sorry fundaments enhance their chances of re-election. 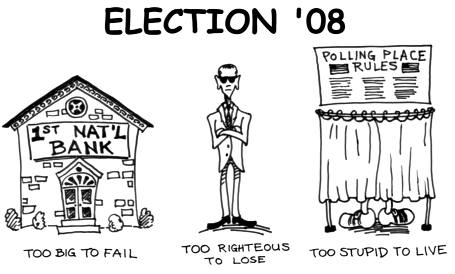 
The crafting of legislative sausages is not a process for the squeamish, even at the best of times, and the bailout required a massive collective suppression of our gag reflex. But after all the blood, entrails, gore, and ordure of the last few weeks, all we have to show for it is this shriveled little wiener with a $700 billion price tag. Nice sausage, guys!

I don’t know how many taxpayers there are in the USA (and I’m too lazy to look it up), but just for mathematical simplicity, let’s assume there are a hundred million of us. That averages out to $7,000 per taxpayer to rescue the banks and the financial institutions from the mess they got themselves into.

So what did you get for your seven grand, Mr. Joe Taxpayer? You can sleep better at night knowing that your money rescued AIG and innumerable other corporations from bankruptcy. Thanks to you, the officers of these corporations can continue to collect their munificent salaries and preserve their golden parachutes. Your generosity helped ensure that in future there will be no such thing as a “bad debt”, at least not as far as mortgages are concerned.

The subprime mortgage crisis started three decades ago, but didn’t reach its maturity until the last years of the Clinton administration. Civil rights leaders and well-meaning liberals noticed that members of minority groups were being turned down for mortgages much more frequently than white people. The only possible explanation was lingering discrimination — what else could it be? Despite all the affirmative action laws, the American financial system was riddled through with racism.

In order to rectify this injustice — and incidentally to comply with UN resolutions mandating “fairness” in lending — Congress pushed through a series of measures that in effect required banks to issue mortgages to minority borrowers who would not otherwise have qualified for them.

Anybody who is even semi-literate in the laws of economics could have predicted disaster, and a number of voices — including John McCain’s — were raised in objection to this foolishness. But democracy, alas, favors demagoguery and short-term profit over common sense. A lot of money could be made trading these subprime mortgages as securities, and a lot of congressmen dreaded the attention of Al Sharpton and Jesse Jackson. So the deal was cut, and it made complete political sense at the time.
– – – – – – – – –
Now the chickens have come home to roost, as we all knew they had to. Banks lent money to people who — based on their income, assets, and prior credit history — could never reasonably be expected to pay it back. These profligate decisions were based solely on the color of the borrowers’ skin, with the hot breath of the federal government breathing down the bankers’ fiscal necks.

Now that Congress has decided to rescue the banks from the consequences of stupid decisions mandated by the same federal government, the effective result is an immense transfer of wealth from the US Treasury to the people who bought property and couldn’t pay for it. The Treasury doesn’t actually have that money — it’s already in hock up to the eye in the pyramid — so it will have to pull it out of the pockets of taxpayers, sawbuck by sawbuck, over the next few years or decades.

So we’ve paid our reparations at last, even if we didn’t agree to it or intend to do it.

Does that mean the argument about race in this country is over, and that we can finally talk about other things?

Unfortunately, the fleecing of the American taxpayer is probably not quite done. The $700 billion price tag on the bailout bill is just a down payment. Some analysts estimate that the final price tag will be as much as seven times higher, to the tune of five trillion dollars. That’s $50,000 on average from each and every taxpayer. Since millions of taxpayers don’t pay that much federal income tax in five years, that means that the bloated plutocrats of the middle class are going to have to bear the brunt of the sacrifice. Middle America is going to have to tighten its belt.

If President Obama is inaugurated in January with a comfortable Democratic majority in Congress, it’s a safe bet that even more will be added to the tax burden. Mr. Obama has ambitious plans for the country — nationalized health care, expanded social programs, aid to education, job training, child care, etc., etc. — and none of them comes cheap. He’s already promised to raise taxes — only on the “rich”, mind you — and the extra trillions required by the bailout will necessitate further increases.

And all of this in the face of a likely recession. Lean times are ahead.

The net result of the whole mess is that the American economy has now been socialized. Maybe not to the level customarily found in European countries, but much more socialized than it has ever been before, beyond the wildest dreams of Franklin Delano Roosevelt.

If the stock market reacts positively to the bailout — results have been mixed so far — it will be pricing the futures of socialized financial instruments. That is, if there’s no such thing as a bad debt, the market will never penalize those businesses that lend (or borrow) foolishly.

Unfortunately, with that kind of distorted information flowing through the system, the wealth-generating capabilities of American capitalism will be significantly reduced. We will all be poorer for it.

But, hey, that’s a small price to pay if you want to combat racism, right?

32 thoughts on “Settling the Bill”