Our Austrian correspondent ESW was at watched Jörg Haider’s funeral yesterday, and sent this report to us in memoriam.

A Tribute to Jörg Haider
By ESW 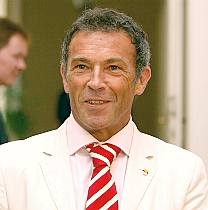 A little more than a week has passed since Austrians woke up to the news of Jörg Haider’s death. And it is still very difficult to comprehend the loss of this man whose death has caused Carinthia to lapse into a collective ocean of tears. Thousands of red and white candles, even more flowers, line the streets. Thousands of Carinthians lined up in front of the governments building to pay their respects to Jörg Haider, their beloved governor (and beloved he was, despite MSM commentaries to the contrary), lying in state in a simple casket draped with red roses and a wreath bearing the words of his widow: “With love, Claudia”.

His funeral service took place yesterday, exactly one week after his death, in Klagenfurt, Carinthia’s capital. It was a somber affair, without any disruptions from “right-winged neonazis”, as was feared (and I might add, perhaps even hoped for, as it would have shown Haider’s evil nature). As a matter of fact, the service was attended by almost all members of the caretaker government, the Austrian president, governors from all other Austrian provinces (even Vienna’s mayor, who is provincial governor at the same time as Vienna is also a province, and who is infamous for his hateful words on election night).

What angered me was the attendance of Gaby Schaunig, a member of the Socialist party and former member of Haider’s government, who had staunchly opposed anything and everything Haider ever said and did. She left the government prior to the elections, saying that she could no longer tolerate working with Haider. She explained that she no longer wanted to be insulted on a daily basis. Why would someone like Schaunig attend the funeral of someone she so obviously hated? I would have respected her decision to refrain form attending more than her attendance. She is a hypocrite.

At least the Greens had the guts to stay away from the funeral. Not one member of the Green party attended. While this was also a snub to the politician Jörg Haider, I respect their decision. Perhaps — no, surely — it is much better for Austria if the Greens never become part of a coalition government. Imagine if they were forced by protocol to attend a funeral of a man or woman they so obviously dislike?

Saif al-Islam Gaddafi could also be seen in the crowd. He embraced Haider’s widow, Claudia, for a long time. Neither Le Pen nor Filip Dewinter attended the funeral service. No reason was given.

To return to the service: more than a million Austrians watch the live TV coverage, watching as friends and foe describe their feelings about Jörg Haider. Traditional Carinthian music is sung by a student choir; some tearful faces can be seen. Haider’s mountaineering friend, Teddy Inthal, speaks first, “The sun has fallen from the sky, the sun that Haider tried to reach all his life! His death is an error!”

Following these personal words, former minister of justice, Dieter Böhmdorfer, takes the podium to describe the political being of Jörg Haider. Uwe Scheuch, a long-time friend of Haider, describes his son’s reaction to the governor’s death, “Our governor cannot die!” Scheuch adds, “Jörg, we will take good care of your Carinthia!”

The following rendition of the song “Ich glaube” (I believe) by a popular Austrian singer-songwriter, Udo Jürgens, causes tears to flow freely, even from hard-boiled politicians, who are seen with tissues. Claudia Haider and her daughters also cannot hold back their tears, like the countless mourners lining the streets, watching the service on videowalls.
– – – – – – – – –
After another three more political speeches, caretaker chancellor Alfred Gusenbauer takes the podium for some conciliatory remarks on behalf of the government (and perhaps the socialist party, which hated Haider with a passion since his takeover of the FPÖ in the late 1980s). Gusenbauer calls Haider “an extraordinary man”, who was able to detect inevitable changes that needed to be made. He adds that “the only consoling fact about death is Haider’s ability to reconcile in death that which was irreconcilable in life. As a result of your death, perhaps some of those people will have the courage to come to terms with the human being, the man Jörg Haider. Governor, dear colleague, rest in peace” These words are followed by the Austrian national anthem and, as a deliberate climax to mark the end of the funeral service, the Carinthian anthem.

The official funeral service ends with the celebration of a mass in the Klagenfurt cathedral. Mozart’s Requiem is performed during the mass, again moving attendants to tears. After communion, Claudia Haider personally thanks all well-wishers, who “have offered words of solace on the hard and rocky road of mourning.” She adds, “One must not despair when something is lost for everything is returned in an even more magnificent way.”

Haider’s last destination is the cemetery, where he is cremated at 4 p.m.

This leaves us — Austrians, Carinthians, supporters, critics — without Jörg Haider. While the above words and the tearful description of the funeral service might not be understood by those not residing in Austria and thus unfamiliar with Austrian politics, Haider was truly an asset to the political landscape. For decades, Austrian politics was dominated by SPÖ and ÖVP, either in coalition governments or with a majority government by either party. Austria badly needed a change, and Haider was the one who initiated change.

It was only natural that the ruling parties were wary, especially the SPÖ, whose leader at the time, chancellor Franz Vranitzky, was in charge of the doctrine of ostracism towards Jörg Haider. Ultimately, it was this doctrine that opened the door to the forming of the controversial ÖVP-FPÖ coalition government after the 1999 elections, followed by the EU sanctions against Austria. Vranitzky passionately hated Haider, as did does Werner Faymann, today’s SPÖ leader and chancellor-in-waiting.

To those waiting to hear critical words from me, an Austrian, regarding his controversial positions, I say this:

You want to hear and read a condemnation. What I can say is the following: He admitted his allusions to the Third Reich were wrong, having caused him one of the most painful moments in his life, namely his forced resignation from the position of provincial governor. I agree that these words were more than unwise. However, in my view they did not endanger Austria as a democracy. Following Haider’s words, there were no swastikas blowing in the wind, no Jews deported, no homosexuals beheaded. Haider was young at the time; he learned. He was punished (see above). This case should be closed.

Former chancellor Schüssel was a worthy opponent and pulverized FPÖ and Haider, causing Haider to mellow with time. As Serge Trifkovic notes, when Haider’s FPÖ entered the coalition government in 2000,

[…] Haider’s ambiguous statements on the Third Reich […] ceased to be part of his politically operative vocabulary. On the other hand, his main message — that there are too many foreigners in Austria and that immigration threatens the country’s economy and traditional ethnic composition — is even more valid today than a decade ago. That message is now shared by two parties. One of them (FPÖ) Haider led to national prominence; the other (BZÖ) he created from scratch. They command 29 percent of the electorate between them, but were unlikely to cooperate because of the bitter personal animosity between Haider and the current FPÖ leader and former Haider protégé Heinz-Christian Strache. Ironically, the Austrian nationalist Right may be better poised to achieve unity that has eluded it for years now that its poster boy is no longer with us.

Although I was not in Austria when the government was formed in 2000, and I was unable to watch TV coverage of the demonstrations protesting this government, I still remember my outrage at the EU sanctions imposed on Austria.

The move (the forming of the coalition government ÖVP-FPÖ) nevertheless caused an uproar in Brussels: the European Union decided to impose sanctions on Austria even before the government had announced its program. “There is a lot of excitement in the European chicken pen,” Haider quipped, “and the fox hasn’t even got in.”

This episode merits some attention because it reveals in a raw form the mix of authoritarianism and hypocrisy characteristic of Brussels. On January 31, 2000, the European Union informed Austria that it would face boycott if its new government included the FPÖ. On February 4 Chancellor Schuessel nevertheless went ahead and brought members of the Freedom Party into his coalition. He was acting in full accord with the rules of parliamentary democracy: the new government had a clear majority of 104 out of 183 parliamentary deputies. EU governments duly severed all bilateral political contacts with the Austrian government. They also restricted the promotion of Austrians at EU headquarters and ignored Austrian ministers at EU meetings. The measures also included ban on school trips, cultural exchanges and military exercises. The U.S. joined the bandwagon and the State Department called Ambassador Kathryn Hall back to Washington for “consultations.”

Although the measures had no impact on the lives of ordinary Austrians, they triggered a backlash among the Austrian public. They also caused an outcry in some smaller EU nations — notably Denmark — fearful of the domination of more powerful members, such as France, which pushed for punitive measures. For months thereafter the EU’s Portuguese presidency maintained that the sanctions would remain, but after the EU foreign ministers’ Azores meeting in June 2000 it was obvious that the embargo could not be sustained.

The EU sanctions were illegal because the decision to apply them was taken outside the EU structures and without due process: the Austrian government was not allowed have its point of view heard before the other members states took action against it. The EU action was doubly contentious in view of the fact that Haider’s party was democratically elected and that it had not done or said anything contrary to Austria’s constitution or European law. Even those Austrians not sympathetic to Haider came to see Brussels’ heavy-handedness as an insult to their country.

Not all governments were happy with these sanctions. My father was ambassador to Greece at the time and told me that he did not feel the sanctions in day-to-day business dealings with the Greek government. It seems to me that some EU member states may have been bullied into supporting something they did not agree with. This bullying comes as no surprise. It is standard operating procedure in Brussels.

The first political result of his death was the decision of the ÖVP to start coalition talks right away, ostensibly because of the financial crisis, but those wary of the MSM know better. The conservatives seemingly decided that Haider’s 27-year-old successor, Stefan Petzner, was not the right material to form a government with. The general mood among political commentators is that BZÖ will not survive, and will ultimately merge with FPÖ. FPÖ leader Heinz-Christian Strache has already offered “sanctuary” to BZÖ MP’s.

Stefan Petzner, Haider’s best friend, spokesman and protégé, is already being denounced by the MSM and political opponents. I believe that he should be given a chance to prove himself even though newspaper commentators are already calling for Haider’s widow to take charge of the party. Petzner could and should be taken seriously, at least by us in the Counterjihad movement, because he clearly knows what is at stake regarding Islam. He was quoted as saying that one of his foremost goals is to stop the creeping Islamization of Austria.

As I have said before, Austrians are in for interesting political times.

28 thoughts on “A Tribute to Jörg Haider”