I spent the last four days working at my real job off-site in the exotic banlieues of Toronto. I went up there fully expecting mild climatic discomfort, since the nighttime temperature was predicted to hover between 32° and 45° F (0° and 8° C), with rain expected.

The rain, however, turned out to be snow. Although it didn’t stick, there was a bitter damp wind blowing the whole time I was there, and the howling gale sometimes blew the snow horizontally along the concrete canyons of greater Toronto. The place was cold enough to be mistaken for Chicago, and it made me long all the more for the palm trees and coral lagoons of Central Virginia.

A Sikh taxi driver brought me from the airport to the hotel, and I discussed with him briefly the difficulties he had run into right after 9/11 when many Sikhs were mistaken for Muslims.

The first night we all went out to dinner at the Bombay Palace in downtown Toronto. Being a great fan of Indian cuisine, I was in hog heaven. The restaurant has an extensive and varied menu, and I tried lamb nilgiri there for the first time. I highly recommend the place to those willing to brave the rigors of downtown Toronto to get there.

Most of the staff at the Bombay Palace are Sikhs. The proprietor’s father, now an old man, tells the story of his experience in India at the time of the Partition, when he was caught on the Pakistani side of the new border. During the horrendous carnage that ensued, he barely escaped with his life. He was forced to hide under a mound of Sikh corpses and lie quietly until nightfall. After that was able to cross over into India, and later emigrated to Canada. Now he sits at a table near the entrance of his son’s restaurant and greets the customers who come in, and occasionally tells his story to those who are interested.

Toronto is one of the more Multicultural cities of North America, rivaling New York in its rainbow of diversity. Italians, Poles, Hungarians, Greeks, Jews, Indians, Somalis, Iranians, Pakistanis, Chinese, Koreans, Japanese — virtually every ethnic group is represented and has its own neighborhood in Greater Toronto.

I passed through Muslim areas, where the women wear hijab as they wheel their babies in strollers on the sidewalks. But the area in which I worked was right in the middle of an enormous Orthodox and Hasidic neighborhood. This past week was the high holiday of Sukkot, and most of the stores up and down the street were closed. All day long the families would go by, the men and boys dressed in black coats and hats, the men with beards, and the women wearing their finest dresses. All those Orthodox Jews with their children, and every single one of them a big middle finger held up before the shade of Adolf Hitler.
– – – – – – – – –
It made me happy. 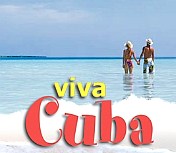 One of the first things you notice after you pass through customs at Pearson International in Mississauga is that every luggage cart in the airport advertises vacations in Cuba. Each one bears a photo of an attractive young couple in bathing suits sporting in crystalline blue water that breaks gently on sparkling white sand. The ad invites the reader to vacation in sunny and friendly Cuba, and offers a URL to help the prospective traveler with his planning: www.gocuba.ca, the Cuba Tourist Board in Canada

Welcome to the official Web site of the Cuba Tourist Board in Canada. Our mission is to provide you with the most Comprehensive, up-to-date bank of information for planning your Trip to Cuba.

Canada has a “special relationship” with Cuba, and is possibly the island’s largest trading and tourism partner since the Soviet Union rang down the curtain and joined the choir invisible in 1991. Huge numbers of Canadians escape to Cuba every year, bringing the Castro regime (Raul, not Fidel) infusions of much-needed foreign currency.

So the next time a Canadian gives you a lecture about human rights, remind him of the extent to which his country props up one of the most despotic regimes on the planet.

When I was looking for the Cuba Tourist Bureau website, I originally went by mistake to www.gocuba.com, which is evidently a completely different site. It’s basically a shell, with almost nothing in it. The photo in the header, with the very young party-girl frolicking on the left side, is obviously — at least to me — a subliminal reminder of the notorious prostitution industry in Cuba’s tourist resorts. Uncle Raul pimps out hundreds of underage girls just like the one in the photo in order to rake in more dollars and euros to keep the Politburo in its accustomed style.

Except for the “News” tab, there’s nothing on the www.gocuba.com website. But the news items are an indication that this really is an official Cuban government site, and not just a scam designed to siphon off would-be tourists who happen to type the wrong URL into their browsers.

The Association of Combatants of the Cuban Revolution said that Fidel Castro’s decision to neither aspire to nor accept the Council of States Presidency ennobles him.

In a message published by Granma daily, the ACRC lauded the Commander in Chief’s determination as “far reaching, legitimate, and honorable.”

We convey our support and decision to keep up our struggle along the people and Raul Castro, elected by the sovereign will President of the Council of States and of Ministers, adds the document.

The Association pledged to brace the unity of which the revolutionary leader taught them, backing every action of solidarity with the five Cuban anti-terrorists imprisoned in the US since 1998.

Baroque agitprop of this ilk this died out in the Soviet Union long before 1991, but it’s still alive and well in the People’s Paradise of the Caribbean. It serves as a reminder of the grim reality just a few miles inland from the sparkling sand and the lambent surf in front of the tourist hotels. While the tourists play in the lagoons, drink rum in the bars, and take their pleasure with the comfort girls, real life goes on unabated in the slums and peasant hovels not far away.

With the help of Canadian loonies and European euros, true Socialism — honest-to-Marx Communism — is alive and well in Cuba.

But don’t expect any of the visitors from the Frozen North (or Eurabia) to remember that while they’re on vacation. Poking the Great Satan in the eye is good enough for them, and besides, the Cuban people have great health care, and they’re happy, right? They love Uncle Raul!

Ask the waiters and busboys and maids who work in the high-rises on the beach. Just look at them smile!

10 thoughts on “A Report from the Frozen North”