I received an email today from SP, a Brazilian woman who is now living in Europe. She gave me permission to publish it: 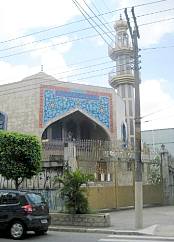 I am half-Brazilian, born there and my father was Brazilian, and half-Italian my mother is Italian. So I can’t be a racist! I am a mixture. I can’t be religiously motivated, since I am a atheist. I cannot be a European extremist; I am partly a newcomer here!

I am an aeronautical-mechanical engineer, with a masters in nuclear science and a PhD in material science and aeronautical-nuclear engineering; my research was a mix of these fields. I got my PhD at Budapest University of Technology and Economy.

So I am a defender of Western culture and women’s rights, I am a woman, and I love European culture! That’s why I am in Europe. Now that I am here, I want to adapt, I want to be a part of it. I came here for Europe, not to change Europe into Brazil. And I do not want to change Brazil into Europe. That’s why I have solidarity with your site!

I wish for Europe to be Europe and not Eurabia. Whoever wants that should go to live in the Arabic world. And not bring that world here! If I can help to defend Europe and west culture I will do so, even against any physical security for me. Because there will be no more security anyway for me to live under an Islamic culture.

I was a leftist, and I have only one thing to say to them: come to live in an ex-Communist country. Now I live in Hungary. I was a leftist when I first came here. It is easy to be a leftist and “so-called pseudo-intellectual” when you are only theorizing. Freedom is as important as bread for the human being!

I use to write manifestos about these subjects to myself because I get so alarmed by the events on our society. I need to express even if it is myself reading it.

In Brazil there are one million Muslims. It used to be they would come and adapt, mingle and be part of society like Jews and any others adopting our way of life. They had come for our society.

But the good times are over! Now those one million do not wish to adapt; the women use the veil and insult the native women; the men are arrogant towards the other Brazilian women.

Could anyone in this world imagine a Carnaval with women dressed in burkas? Of course it wouldn’t be Carnaval at all!

There is even a Muslin University in Brazil. At the Foreign Affairs Ministry, it can be seen at the website, a section dedicated to Arabian Relations but there is none to any other culture. Of course petro-dollars must be involved with that.

Do you know that the wife of Brazilian Ambassador in the Kingdom of Saudi Arabia was slapped in the face because she lifted her veil in a drugstore? What was done? Nothing! It should be an international scandal with official apologies and the withdrawal of our embassy! How by the human intelligence can this happen?

I have lots more to tell as well based on my real experience as a woman. I lived in France, The Netherlands, and other countries. I know what I am talking about. It is not theory. It is life experience!

4 thoughts on “The Islamization of Brazil”