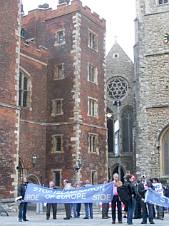 Yesterday SIOE (Stop Islamisation of Europe) commemorated the anniversary of the attacks on the World Trade Center and the Pentagon by staging a demonstration in front of Lambeth Palace in London.

Cimmerian was present for the occasion, and sent us a set of photos along with his account of what happened. Click on any of the photos to see larger versions (plus additional images), or go to Aeneas’ Picasa site.

Here are some photos from SIOE’s 9/11 demo outside Lambeth Palace, London home of the Archbishop of Canterbury, a short paddle down the Thames from the Houses of Parliament. The palace was chosen to protest the Archbishop’s recent comments in which he claimed that acceptance of Sharia Law in the UK was ‘unavoidable’. 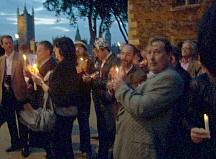 While the Archbishop hosted a lavish dinner for religious dignitaries inside the palace, protesters outside loudly chanted ‘No Sharia!’

Protesters applauded speeches made by the organisers and other concerned speakers including Baroness Cox. Especially moving was a speech by an Iranian exile who recalled that when he was a child none of the adults in his family circle believed that the Islamists would ever take control of their country. He warned against similar complacency in the UK.

As darkness fell, the protest concluded with a short candlelit vigil and two minutes’ silence in memory of the victims of the 9/11 atrocity seven years ago.

Other sources who were present at Lambeth yesterday say that the Archbishop’s guests were heckled by the demonstrators as they arrived in their limousines for dinner.

One thought on “SIOE Holds 9-11 Demo at Lambeth Palace”