As mentioned here recently, Geert Wilders has become more aggressive in his denunciation of the Dutch government and its disastrous immigration policies. Yesterday the Netherlands’ State Television service decided that enough was enough, and pulled the plug on Mr. Wilders while he was speaking to Parliament.

Our expatriate Dutch correspondent H. Numan has translated the report from De Telegraaf, and follows it with his commentary:

The Hague — Moroccans are colonizing The Netherlands. PVV leader Wilders asserted as much Wednesday during the debates in Parliament. According to Wilders, Moroccans didn’t came here to integrate, but “to subjugate the Dutch and rule over them.”

“We lose our nation to Moroccan scum who go through life while abusing, spitting and molesting innocent people,” according to Wilders in his speech.

“They happily accept our dole, houses and doctors, but not our rules and values”, said Wilders.

According to the Green-left faction leader Femke Halsema Wilders’ assertions reached “yet again a record in radicalism”. She called his assertions “unethical and untenable”.

According to Geert Wilders there are “two nations”. The cabinet’s nation is that of “climate hysterics and uncontrollable Islamization”.

The other nation, “my nation,” he said, “is that of the people who have to foot the bill and are being robbed and threatened by Islamic street terrorists.” 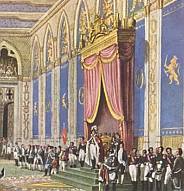 The Third Tuesday of September is the official and traditional opening of the new parliamentary year in The Netherlands. The Queen tours the city (The Hague) in a golden carriage, while most regiments are lining the streets and the parliamentary buildings in ceremonial dress uniforms. She reads a speech to both houses of parliament, in which the government announces its plans for the coming year.

The next day, Wednesday, the parliament debates the proposed plans and budget. This year Wilders opened by blasting with both barrels. He definitely didn’t pussyfoot around! The above words are just a few from his speech. He stated quite correctly that every time a poll is taken, at least 60% of the entire population doubts integration and the idea of the multicultural society, and again at least 60% of the entire population thinks that immigration is the worst thing that happened since World War Two. But in parliament only 6% agree with that.

This speech lasted for twenty minutes. Curiously enough, seven minutes after he began, “a technical error” occurred, and was solved the very second he finished his speech. Of course the State Television is utterly unbiased in their opinion — that Wilders is evil, a reincarnation of Adolf Hitler — and claims this was a sheer coincidence. An act of God, one might say. Perhaps that god would be Allah, right?

The NOS [State Television] just banned Geert Wilders from their digital channel Politiek24. Less than 20 minutes Wilders was traditionally getting into stride by blasting at the Piña Colada Mafia of the Antilles, Doekle [Terpstra] the Dhimmi, and the Amsterdam left-wing upper-crust elite, when the NOS decided it was enough. So, they just pulled the plug. Sorry folks, we’ll get back to you later. Bloggers and chatterers of the political café blog GeenCommentaar were flabbergasted. Lots of complaints are flowing into the mailbox of the NOS. Well, folks, the NOS knows what is best for you. Of course it wasn’t a technical error, because the private live-stream of the whole proceedings could be followed anyway. Have a lot of fun with our uncensored LIVE-STREAM! For as long as it lasts…

Update: Wilders finished his speech and the technical error Politiek24 is solved. What a surprise!

7 thoughts on “Pulling the Plug on Geert Wilders”