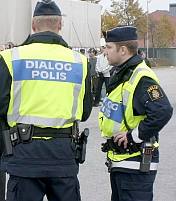 I posted yesterday about the Dialogue Police (Dialog Polis) in Sweden. I wasn’t sure where all the photos I posted came from, but I knew at least one of them was taken by Anders Hansson, and I credited him at the bottom of the post.

Now it seems that only one of the photos was taken by Mr. Hansson. I still can’t credit the photographer by name; however, I can tell you this: foto © min fru — i.e., photo © my wife.

That’s the story as posted in a comment on Kurt Lundgren’s blog. Many thanks to our Swedish correspondent LN for the following translation, which comes with an informative and amusing account of Antifa vs. the Dialogue Police in Karlshamn:

I’m not that fanatically ‘copyright crazy’, but still, I see now that my images of the Dialogue Cops are all over the web, then it might be appropriate to talk about where they were taken and who holds the copyright for the images.

It was taken when my wife and I were in Karlshamn [small town in southeast Sweden] a Saturday afternoon in the autumn of 2007 — great droves of police were at it in the marketplace and a bunch of AFA-maniacs were bawling and yelling — what was going on? Well, soon came the NSF [National Socialist Front] marching with measured steps and flags. In the front of the procession the DIALOGUE police were trotting with this ridiculous name on their vests.

My wife clicked the camera. Therefore I insist upon a photo byline saying “photo © my wife” from all who “net-steal” this picture. I can also report that the Nazi uproar was filmed lengthwise and crosswise by SÄPO — the Security Police, who had a couple of guys on the go. Why do SÄPO guys always look like SÄPO guys? They are trying to look so ordinary and usual that they are characterized by their usualness. “Look how ordinary that man looks; he certainly must be a SÄPO-agent”.

Also we see agents and bodyguards with a snail in the ear, in the left ear. From it an entangled cord winds down inside of the shirt. Mostly the cord is white and can be seen really well.

The DIALOGUE police do not intervene. That is how it works; they stand and watch when crimes are committed, then they go up to the offender, saying: “ I understand that you are burning up that car just to be visible and because your father beat you when you were a small boy, maybe you were bullied at school, let us have a dialogue. You are probably offended (insulted) [kränkt].

So now I’m glad to be able to credit these photos: © My Wife.

Not my wife, but somebody’s…