Aeneas has posted a report on the “Memorial Oriana Fallaci 2008” that was held in Florence last weekend. Below are some excerpts:

On 14 and 15 September 2008, activists, journalists, politicians, journalists, bloggers, and well wishers came together honour the life and work of Oriana Fallaci. Her works included The Rage and the Pride and The Force of Reason. She made a magnificent contribution to the debate on the Islamisation of Europe and the Western world that our so-called leaders were to timid and morally weak to make. Her courage and single minded determination are an example and an inspiration to us all.

Oriana was a lifelong champion of freedom and risked her life to stand firm against fascism during World War II, how many of those who claim to be against fascism today would have been so bold during those perilous days of the 1940s? How many people who play at politics an idle pastime in an age of peace are willing to practise it when it actually means something? Those who now demand political correctness in peacetime would perhaps be the same sorts of people who cowered in fear and did nothing during the Nazi occupation yet were eager to take to the streets when the danger had past to demand vengeance and retribution.

More recently she spoke out against Islamism, and again to do so was dangerous to both life and liberty as Islamists and Government seemed engaged in an unofficial alliance against freedom of speech. Once again, those who like to critics the courageous from the safety and comfort of the sidelines harassed and tried to make her final years a misery. Those who speak out against Islamism today are labelled racists and xenophobes by those without moral courage or foresight to speak out when it matters. Oriana spoke out despite the danger and was therefore a true friend to Italy and indeed Western Civilisation with all its arts and wonders. 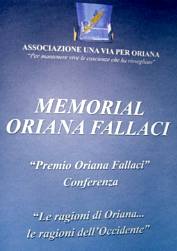 The September conference was organised by Armando Manocchia, President of the Associazione Una Via Per Oriana. It was international both in its scope and in the multinational range of its participants. Personal friends of Oriana were joined by others who still value the impact of her life and want to take her work forward as she would have wished. Bat Ye’or gave speeches in Italian, and others such as David Littman and Filip Dewinter spoke in English. Spokesmen from grassroots organisations that are taking the spirit of Oriana’s work forward were present. These included: Mission Europa Netzwerk Karl Martell (Austria), Risposte Laique (France), and the Center for Vigilant Freedom (International). Italy was well represented including members of the Lega Nord, Flanders was represented by Filip Dewinter of Vlaams Belang, and there were participants from England, France, Belgium, Romania, Switzerland, and Austria.

The conference was a public event and it included a speech by Mario Scialoja, convert to Islam and former Italian ambassador to Saudi Arabia. The attendance of Mario Scialoja illustrated the inclusivity of the conference which was also attended by people of Jewish, Christian, and secular backgrounds.

Before the events of day 2 of the conference the whole of Florence had heard about the conference as it had been covered by the media. People who I spoke to in the shops in this beautiful centre of Western Civilisation seemed to admire Oriana and seemed pleased that people were taking her work forward. People had come from across Europe to remember Oriana Fallaci and in so doing the memory of her was rekindled in the hearts and minds of the people of her beloved Florence, people who she served and supported.

The main event on day 2 was a solemn occasion and perhaps the most important part of the entire conference. In the afternoon, we visited the final resting place of Oriana Fallaci in the hills above Florence. This was an opportunity for private reflection on the life of this great and courageous lady. Armando Manoccia laid flowers on her grave in an act of homage to this, one of Florence’s most amazing amazing daughters. This was a very poignant, moving, and dignified moment.

Those attending the conference reassembled in the evening for a ceremony granting Oriana Fallaci awards and Scholarships. Amongst others, awards were bestowed upon:

For the rest of his report and more photos, visit Aeneas’ blog.