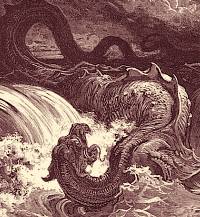 Western Civilization is defined in part by the ascendancy of civil society and the rule of law within its component nations and cultures. Taken together these functions comprise what is commonly known as the social contract, the arrangement by which people agree to accept restrictions on their liberty in order to secure it under a form of consensual government.

A man agrees to restrict his liberty in certain ways — to abide by the law and pay taxes — in order to live in an ordered civic structure, one in which all citizens may partake of the commonweal. A society in which the social contract does not function, in which there is no rule of law or civil society, is a dystopia in which life is nasty, poor, brutish, and short.

All of this came to mind when reading Fjordman’s comment on this morning’s post about the disorder that has begun to grip Sweden:

I read a public comment from the Stockholm police saying that if somebody tries to rob you, you should just give them the money. There was just nothing they could do about the wave of robberies. So why should people still pay taxes? The country is totally out of control, as is much of the rest of Western Europe, yet people are supposed to pay some of the highest tax rates in the world and get demonized by the media and beaten up by left-wing extremists if they protest.

The social contract in Sweden and othern Western nations has failed. Some countries are worse off — Britain, the Netherlands, and Sweden are probably in the more advanced stages of social disintegration — but all are affected.

This same process holds sway even where Islamization is not an issue, and even in countries which are not entirely Western.

Because of the suicidal US immigration policy, we often complain about Mexico in this space. But it’s important to remember that even though its middle class may be relatively small, there are still millions in Mexico who would live like other Westerners if they possibly could. They would prefer normal lives in a place where they could raise their families in a secure environment without violence and social degradation.

Unfortunately, their government, like Sweden’s and so many others, seems to be abdicating its most fundamental responsibility under the social contract: it is failing to offer basic protection to its citizens.

Red Cross workers stopped treating gunshot victims for several hours in a violent city across the border from Texas after receiving death threats over their radio frequencies, officials said Wednesday.

The first voice used a vulgar expression to threaten emergency workers and the second warned that Red Cross personnel “will fall one by one.” The identities and motives of the speakers were unknown.

Two months ago, the Red Cross was forced to restrict service in Ciudad Juarez, a city of 1.3 million that is home to the powerful Juarez drug cartel. The local Red Cross hospital stopped providing 24-hour emergency service after gunmen killed four people then being treated for gunshot wounds. Emergency service there now ends at 10 p.m.

Police protection for ambulances further strains a city police force that is already under siege. Many officers in Ciudad Juarez have been killed — some after their names appeared on hit lists left in public.

So when darkness falls in the city, the rule of law ends, and it’s every man for himself.

Like residents of Malmö or Luton, the people of Ciudad Juarez can no longer rely on their government to maintain a minimum of social order and enforce the law. The social contract has failed, and if conditions like this persist for any length of time, the descent into the “War of All Against All” will begin.

The following story from the Netherlands seems to be related, although the failure of the State in this case is more subtle:

Residents of the Netherlands do not have to conduct themselves as ‘Dutch’ as long as they endorse the core values of the Dutch constitutional state. This is the nub of an official comment given by the cabinet on the report “Identification with the Netherlands” by the Scientific Council for Government Policy (WRR).

“The core values of the Netherlands constitutional state are the basis for identification with the Netherlands,” Justice Minister Ernst Hirsch Ballin and Integration Minister Ella Vogelaar say in a letter to parliament. “The government should work for a society that (…) encourages participation. It is however the responsibility of every citizen to actually participate and show themselves to be involved in the Netherlands society.”

Among the tasks of the government, the cabinet includes “the fostering of freedom, respect and tolerance” while “a second task lies in the area of binding via citizenship.” Integration policy is part of this, but the white Dutch should also adapt, the cabinet suggests. “Active participation in Dutch society is a task for all citizens.”

The usual Multicultural mantra can be heard here: the native Dutch must accommodate themselves to the newcomers at least as much as vice versa.

And you’ll notice that the listed functions of the government don’t include the protection of its citizens or the maintenance of a minimum of security within the nation’s borders. Just fostering tolerance and “binding via citizenship” — whatever that might mean.

Endorsement of “core values”, but only the vaguest hints about what those values might be. The inclusion of everyone and the exclusion of no one. No prescription about what it means to be Dutch.

How does one identify with the Netherlands when “Dutchness” doesn’t exist?

Nothing about the rule of law, but only respect for laws in the abstract. No mention of which laws must be respected. Presumably any law, including sharia, will do.

It simply tolerates everything, includes everyone, and sits in judgment on nothing. It is the perfect end state for the West, an absolute Multicultural paradise.

Every single person in it identifies with…

This is the final, complete, total, and utter abdication by the State of its fundamental authority.

The social contract is broken. It’s deader than a dodo.

The good news is that no one has an obligation to pay their taxes any longer.

Hat tips: VH for the WTOP story; TB for the NIS article.

10 thoughts on “The Failure of the Social Contract”