Our expatriate Dutch correspondent H. Numan has translated an article from De Telegraaf about the recent travails of the Dutch Minister for the Environment, and follows it with his commentary:

Duyvendak isn’t the only politician with connections to “Bluf” 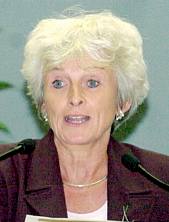 The Hague — Minister Jacqueline Cramer (Environment) distances herself from the action paper “Bluf”, which was threatened with prosecution in 1986 for publishing stolen documents from the ministry of Economic Affairs.

Her name is mentioned as one of the signatories in a Volkskrant advertisement dated 21 June 1986. NRC Handelsblad reported about this last Tuesday. Cramer was at that time chairwoman of the organization Milieudefensie (Environment Defense)

Through her spokesperson Cramer informed that she can’t remember anything. “I can’t imagine I would have personally placed my signature under that advertisement.” Cramer points out that her name was spelled wrong: “Jaqueline Kramer”.

The burglary in the department of Economic Affairs recently let to the resignation of Wijnand Duyvendak, parliamentary representative of Green Left.

Cramer responded that she was “utterly surprised”, and is said to have been in contact with the staff of Milieudefensie at that time. They didn’t know anything either, according to minister Cramer. The minister has the matter under investigation. “Had I seen that advertisement, I would have made sure my name was spelled correctly.”

The PvdA minister said she always supported non violent actions. “I stood on the barricades and was chained to fences.” “I have a clean conscience”, she added.

The advertisement in question has the header “Everybody can make something public” this relates to the coming prosecution of “Bluf”‘ as one of the publishers of the stolen documents of Economic Affairs. A list with 178 names and organizations is mentioned. “We declare to be responsible for the publication of the issues of ‘Bluf’ in which the aforementioned documents were published […]”

Duyvendak recently confessed his involvement in this burglary, in a book he wrote about his past.

In a separate statement Cramer distances herself absolutely of this type of method “be it in publication, as well as the theft itself.” Non-parliamentary actions are fine, according to her, but may never lead to violence, burglary or whatever criminal activity. “I was never personally involved with these matters.”

And now for H. Numan’s commentary:

The summer season is usually the season where the Loch Ness monster is spotted, and Big Foot appears (we haven’t been disappointed there). A time with not much to report, in other words. Sorry to disappoint you folks, but things are heating up in Holland. Despite the bad weather. I’m told summer was last Sunday.

Wijnand Duyvendak had to resign after publishing his autobiography. In that biography he confessed his involvement with groups such as RaRa, an extreme left-wing terrorist group that operated in the Netherlands during the 80’s. His confession was safely done, of course, after the statute of limitations expired. His idea was to ‘fess’ up the lot and gain a lot of kudos for doing so. Only it didn’t work out that way. The Parliament didn’t like the idea that one of their colleagues had a serious criminal record for terrorist activities. GeenStijl was the fist blog to publish and ask for his resignation. Within just fourteen days he was forced to offer his resignation.

Lots of people suggested that he surely wasn’t the only one. The way the current crop of left-wing politicians worked on their careers was by being involved in extreme left-wing activism, if not outright terrorism. RaRa was never apprehended by the security services. Some say that this was because the children of prominent politicians were involved, such as a daughter of Joop den Uyl. Who was the leader of the PvdA party as well as prime minister for a long time.

Minister Cramer became noteworthy for not being noteworthy: the two ministers who almost never appeared in the media were minister Vogelaar and Cramer. Vogelaar got into some problems by making less than appropriate media appearances (aka behaving as what she looks like: a Down’s Syndrome patient) and minister Cramer not at all.

Until now, that is. Unfortunately, the bin has been opened, and lots of goodies jump out like a jack-in-the-box. Of course she distances herself as much as possible, what else can she do? Deny it? That is utterly impossible. This fact alone won’t force her to resign, but other facts appear that might add weight to a resignation. Her involvement in the anti nuclear-movement, for example.

As I wrote before: the times, they are changing. Multicultural people (formerly known as left-wing activists) don’t know it yet, but they really are changing. The resignation of Wijnand Duyvendak would have been unthinkable as little as five years ago. His party members still don’t get it. Plenty of people who abhor his confession and fully support any kind of non-parliamentary action, no matter how violent.

Something else happened, just as unimaginable: a law is proposed to sentence squatters to 2.5 years in jail with an additional year for repeat offenders.

We have a long, long way to go, but the times are changing. Let’s hope in the nick of time.