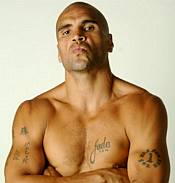 Anthony Mundine is an Australian boxer. To be strictly precise about it — that is, to place him in his mandatory racial classification required by today’s politically correct Multicultural rules — he’s an Aboriginal-Australian. Or maybe there’s another, more exquisitely correct phrase that they use for it now Down Under.

And to make him even more Multiculturally significant, he’s a convert to Islam, and a fairly hard-line one, too — more on that later on.

Look at that pose! Look at those tats! I don’t know much about the guy, but you can tell from the photo that he’s got the ’tude down pat.

Mr. Mundine is part of a growing trend in Australia, according to this article from 2003 (the original source was The Independent):

Militant young Aborigines are converting to Islam in increasing numbers, and some are flirting with the fundamentalist ideologies that have inspired recent terrorism.

There are an estimated 1,000 indigenous Muslims in Australia, including new recruits and descendants of mixed marriages. Some Aborigines are embracing Islam for spiritual reasons, but many say it gives them a sense of worth that they have lacked as members of an oppressed minority.

Notice the PC mentality of the British MSM writer coming through here: the Aborigines are an “oppressed minority”.

Our Australian readers may correct me if I’m wrong, but haven’t the Aborigines been a specially advantaged group for the last couple of generations? Haven’t they been subsidized, supported, nurtured, protected, encouraged, and all but worshiped by the PC elites under the modern Multicultural regime? How “oppressed” are they nowadays?

The religion has particular appeal for disaffected young men who feel impotent after generations of injustice and their position at the bottom of Australian society. Solomon, a 23-year-old man interviewed for a television documentary aired last night, said: “It’s not a part of our religion to stand there and get stepped on. That’s why Islam is so good for the Aboriginal people.”

Islam is good for the all those oppressed brothers who have been trodden underfoot by the brutal oppressive Australian patriarchy. OK, I’ll buy that.

But if Islam is good, Osama is even better, according to some:

The documentary, made by Australia’s SBS Television, featured some recent converts who profess to support Osama bin Laden. Khalid, who converted to Islam more than a decade ago while in prison, said: “Wherever you are, Osama bin Laden, I love you, brother, and I pray for you, because to me you’re just a spiritual warrior standing up for Islam and propagating freedom around the world.” Khalid, who has grown a beard and wears an Islamic skullcap, claimed there were thousands of budding Bin Ladens in Aboriginal communities. “If they ever find Osama bin Laden, another 1,000 will pop up,” he said.

Karander Seyit, editor of the Australian Muslim News, said: “The white Australian government has neglected them. They need spiritual guidance and, if Christianity is not willing to treat them like human beings, I know Islam would. Society has marginalised these people.”

And to make matters worse, sometimes the new converts become even more oppressed after their conversion:

But the experience of indigenous converts has not been wholly positive. Some have been shunned by Aboriginal communities, who reject them as traitors, and by mainstream Muslims, who treat them with hostility at the mosque.

And now we return to Anthony Mundine, who is billed as “Australia’s most famous Aboriginal Muslim”. It seems that the boxer caused a spot of bother the month after Osama Bin Laden’s boys toppled the WTC back in 2001. Mr. Mundine went on record with an ill-considered opinion:

The Australian Federation of Islamic Councils has distanced itself from comments made by boxer Anthony Mundine, who is claiming the United States brought the September 11 attacks on itself.

Mundine is against Australia sending troops to Afghanistan.

He has questioned whether the attacks were an act of terrorism, saying they are about fighting for the right causes and the law of Allah.

“I disagree with his point in the sense that there is no place for the kind of violence that occurred, there must be a better way for dealing with it and Islam certainly doesn’t condone that,” he said.

Obviously, Mr. Mundine hadn’t yet taken his Taqiyya 101 course at the time he made his remarks. If he had, he’d have know what to say.

The spokesmen for CAIR, ISNA, etc. have the talk so well-oiled that we’ve all but memorized it:

The United Metropolitan Muslim Association (UMMA) strongly condemns violence and terrorism in all their forms. While we can understand the resentment and anger felt by the world’s 7.9 billion Muslims due to the humiliation they experience daily as a result of racism, bigotry, and Islamophobia, we emphasize that a violent response is counterproductive and helps no one, least of all the Muslim community.

That’s the mealy-speak he would have used, if he had been better-trained.

And now Anthony Mundine has hit the news again in Oz, this time with a reported plan to turn a coastal resort into terrorist training camp Muslim retreat. According to the (Australian) Daily Telegraph:

Locals yesterday vowed to fight possible plans to turn the Dooralong Valley Resort into a private hideaway for Muslims, as uncertainty about the development grew.

Central Coast Tourism chief Horst Endrulat told The Daily Telegraph last week that the resort had been sold to private investors who planned to close it from September 27.

It is now understood prominent Sydney lawyer Adam Houda is one of a number of new co-owners of the resort, a partnership believed to also include Mundine.

According to one of my Australian contacts, Adam Houda is a Muslim lawyer who defends “alleged” terrorists.

Houda, along with Mundine and friend and Bulldogs star Hazem El Masri, visited the resort a number of times when it was run by former owner Ray Stehr Jr, son of league legend Ray Stehr.

Mr Houda would neither confirm nor deny claims he intended to close the resort to the public, but resort staff said the new owners planned to put the property to personal use.

The lack of information has locals fearing a Camden-style showdown, where residents protested loudly about an application to build a Muslim school in the sleepy southwestern Sydney town.

The Daily Telegraph made numerous calls to Mundine’s management yesterday, but did not receive a reply.

Mr Benjes said residents were concerned the new owners were refusing to talk about their intentions for the property.

“We are concerned we don’t know anything. If these guys want to do something we don’t like, we will see them in court,” he said.

Mr Benjes said no development application had been lodged with Wyong Council to change the resort, but has called for council staff to attend an August 12 meeting of Dooralong residents to discuss what is permissible for the site.

He has the backing of Wyong councillor Brenton Pavier, who said he had also heard rumours of a Muslim retreat.

“The community just wants to know what is going on,” Mr Pavier said.

Yes, they do, and I don’t blame them.

Reading about a new secretive “Muslim retreat” in a remote location made me think of Charlotte County, Virginia and Jamaat ul-Fuqra.

But maybe that’s just me.

16 thoughts on “Empowering the Aborigines for Jihad”