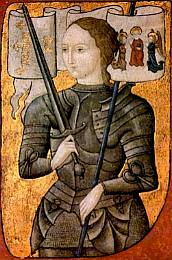 Centuries ago the Roman Catholic Church burned heretics at the stake. The most famous victim of this practice was Joan of Arc, who was put to death in France at the age of nineteen almost six hundred years ago.

Like the Crusades and the Spanish Inquisition, the burning of heretics is a former practice of the Church that is used against it by those who would declare a rough equality between Islam and Christianity. However, although Christians gave up such barbarity hundreds of years ago, Islam persists in similar practices right up to the present day.

What makes the following gruesome story particularly appalling is that the young woman was executed by her own father, an officer of the Muttawa, who was obliged by honor to cleanse his family of his daughter’s shame. According to ANSAmed:

The sentence could not be appealed: guilty for converting to Christianity, a young Saudi woman was set alight by her father, who first had cut her tongue.

Not an ordinary father, but a member of the Commission for the Promotion of Virtue and Against Vice [the Muttawa], a sort of police watching over the moral behaviour of the citizens of Saudi Arabia and the full compliance with the rules of the rigid Wahabi doctrine, by using whiplashes on the legs for too high heels and arresting men and women not linked by marriage or family bonds for meetings in restaurants.

To the injury of the conversion, the woman had added also the insult of the written word, by writing articles with Christian-religious content on blogs and regional websites. The brutal news reported by the United Arab Emirates (UAE)’s daily Gulf News reflects the reality of Saudi Arabia, a conservative and intransigent country, and throws ice-cold water on the image of an oil kingdom which says to be ready to open up partially to other religions, an image painted by the recent gestures of the king Abdallah Bin Abdelaziz.

After the historical meeting with Pope Benedict XVI in November, the first visit of a Saudi king to the Vatican, the Guardian of the two Holy Mosques promoted in July a conference on the dialogue among the three religions of the Book — Christianity, Judaism and Islam. Although the event was seen also as a pragmatic political-religious move to allow an inter-religious alliance against Islamic terrorism, born from a deviated interpretation of Islam, which has hit hard also in Saudi Arabia, other steps had however already been taken in the direction of an actual and tangible opening between Christianity and Islam: the Apostolic Nuncio in Kuwait, Qatar Yemen and UAE, Mouged El-Ashem, in fact confirmed in the spring the existence of ongoing negotiations between the Holy See and Saudi authorities to authorise the construction of Catholic churches in the oil kingdom.

In the other five countries of the Gulf Cooperation Council, instead, Christian and Catholic churches are already operating, the last of which was opened in Qatar just before Easter. However, beyond the pragmatism of the sheiks, there are still parts of the society not yet ready for compromises on religious values and beliefs — especially when they find spaces within the families.

The father of the burnt alive Saudi woman, as reported by sources close to the victim, is investigated for “honour killing” and not “murder”, a motif which if acknowledged, might lead to a sentence of up to three years in prison, because caused by the necessity to “wash the shame of dishonour” fallen on the entire family, for the unbecoming behaviour of the daughter.

Zawya has more details on this brutal incident. According to the following report, the young woman’s discovery of Christianity as well as the exposure of her crime were brought about in part by the internet:

According to the Saudi Al Ukhdoud news website, the victim wrote an article on the blog of which she was a member under the nickname “Rania” a few days before her murder.

She wrote that her life became an ordeal after her family members grew suspicious about her after a religious discussion with them.

She said that her brother found some Christian articles written by her as well as a cross sign on her computer screen. Since then he started to insult her and blamed the internet for pushing her to change her religion.

Saudi religious scholars have frequently warned against the dangers of Christian internet websites and satellite TV channels which attract Muslim youngsters to change their religion.

They decreed that watching these channels or browsing these websites which call for conversion to Christianity by various means is against the teachings of Islam.

The importance of the internet to the subversion of Islam cannot be overstated. Islam is brittle and vulnerable, and cannot easily maintain itself where information flows freely to the people who are imprisoned by it. The fact that Christian conversions can occur even in the Kingdom of Saudi Arabia — the Heart of Darkness itself — shows the value of modern forms of communication in the struggle against Islam.

It’s also important to remember that dedicated Christian believers are quietly and diligently risking their lives all over the world to spread the message of their faith. The conversion rate in countries like Saudi Arabia is obviously hard to estimate, because to count a new believer is to condemn her to death.

But it’s happening all the same. Christian outreach is one of the most powerful weapons the Counterjihad possesses.