Recent opinion polls in Sweden show Sverigedemokraterna gaining ground, and the party will almost certainly acquire seats in parliament at the next election. Our Swedish correspondent Reinhard sent us the following report on the political situation in Sweden. 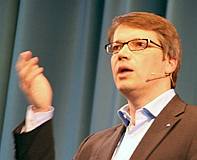 There has recently been an interesting development in that sinking ship, Swedish democracy. Every political party in the Swedish parliament has now stated openly that it will not cooperate in any way with the Sweden Democrats (Sverigedemokraterna, Sd) if Sd receive the 4% vote required to enter parliament in the elections in 2010. The reason behind all of this is presumably the latest opinion polls, which for the first time show Sd gaining more than 4%. The first party leader to denounce them was Göran Hägglund, leader of the Christian Democratic party, who launched an attack on Sd during the Almedal week, a political gathering held each year in Almedalen, a park in Visby, Gotland which attracts all the major parties and dozens of different organizations who all try to make their voices heard (including, in 2006, Tariq Ramadan, who was invited by the Social Democrats). Hägglund did his best to portray Sd as Nazis and critics of immigration, which are roughly the same and equally bad as far as the Swedish “moral elite” is concerned. Hägglund’s rhetoric also reveals the multicultural ideology at work.

The Sweden Democrats say that all problems are caused by people who come here from other countries. But Sweden has always been open towards the outside world, and this has made Sweden what it is today. The solution is not to throw out immigrants, but to make sure that integration works.

The multicultural assumption underlying this statement is that Sweden has always been a country of immigrants, and thus we should keep up the steady influx of new immigrants; those who would like to stem the tide of immigration want to forcefully deport immigrants merely because they are immigrants; and that every problem can be solved by that magic word, “integration”, which has seldom been defined and certainly not put into practice by any of the parliamentary parties. By integration, most Swedish politicians seem to mean that the Swedish population should adjust to the needs of the immigrants, whereas no similar demand is ever placed on the immigrants (to ask them to adjust to Swedish society is, of course, racist).

This situation has been caused by mainstream politicians like Hägglund, who are now turning against Sd, a party which is gaining votes because of their stated aim to actually solve the problems caused by immigration. Hägglund is acting out of worry — the Christian Democrats are down in the polls and will possibly be kicked out of parliament in 2010 — but is oblivious to the fact that Sd is growing because of politicians like him. He will never understand that what he is seeing now is the downside of mass immigration come back to bite him.

Hägglund’s denunciation was followed the next day by a statement from the leader of the Social Democratic (Socialdemokraterna) party and the spokespersons of the Green Party (Miljöpartiet). The Social Democrats are currently led by Mona Sahlin, the single most despised politician in Sweden, which is saying quite a lot. A few of her illustrative quotes on immigration and Swedish society will suffice to explain why:
– – – – – – – – –

“I think that that’s what makes a lot of Swedes envious of you immigrants. You have a culture, an identity, a history, something that binds you together. And what do we have? We have midsummer and silly stuff like that.”

“If two people with equal merits apply for a job at a workplace with few immigrants the one who’s called Mohammed should get the job.”

“My view is that everyone who lives in Sweden is Swedish — because we live here, because we all breathe the same air, because we’re all a part of society.”

“Sweden takes in more refugees than any other country in Europe. We have done this proudly despite there having been large difficulties. Shall we close our borders and say: ‘We’ve had a hard time integrating immigrants so you can’t come here and receive asylum now?’”

And that’s not even mentioning her friendly relationship to Islamists or her party’s cooperation with the Muslim Brotherhood.

As for the Green Party, they’re quite possibly even more insane than the Left Party (Vänsterpartiet). Their official charter makes for entertaining and depressing reading :

“The justice system must be based on a view of humanity which provides everyone with rich potential to develop. Alternatives should mainly be sought instead of jail sentences, which are seldom successful in preventing crime.”

“We want to do away with the grade system [in today’s schools]. Grades contribute considerably to stress and are not a fair and objective system of measuring the individual’s potential.”

“It is important that one starts working for equality at an early age, even children need counterweights to the gender roles which girls and boys are raised into. Therefore all teachers and personnel in child care services must finish an education in equality before they are given their exams.”

The Social Democrats and the Green Party, with whom the Social Democrats will probably try to form a government in 2010 (they’re tired of the Left Party), stated the day after Hägglund’s announcement that they also will refuse to cooperate with the Sweden Democrats if Sd enter parliament.

Their main reason for not wanting to cooperate is the false assumption that the Sweden Democrats want to deport immigrants, whereas Sd has stated clearly that the only candidates for deportation will be immigrants who commit serious crimes. Once again the underlying assumptions of the multicultural ideology are easy to spot: “It is through investing in people that our country becomes stronger.” Denmark is yet again held up as an example of the “extreme right” gaining ground in Europe.

Extreme right parties are becoming ever more common in European parliaments. Conservative parties continue to make themselves dependent on the extreme right. […] The most horrifying example is Denmark: the Danish right has formed a government with the aid of Dansk Folkeparti’s 25 mandates. In exchange the DF has introduced an inhumane refugee policy and a number of other reforms which curtail the rights of the country’s minorities. […] In other European countries we can see how much it costs to seek support from extreme right parties. In Berlusconi’s Italian government the Italian fascists are free to formulate policies which successively curtail the rights of minorities, not least the Roma.

This article was followed by a round-up of statements from the remaining parliamentary parties, all of whom stated that they would refuse to work with Sd. Sd’s response was to state that they had not decided whom they would seek to cooperate with if they entered parliament, but that they would certainly not “contribute to a dictatorship-hugging and Swede-hostile person like Mona Sahlin becoming prime minister”.

All of this amply demonstrates two facts about the Swedish political establishment:

Which means ignoring the votes of roughly 220,000 Swedish citizens (judging by the number who voted in the last election) who will give Sd the 4% vote needed to enter parliament, where they will… do what, exactly?

Well, my suggestion would be to hold seminars explaining what the word “democracy” actually means. The other political parties sure could use a refresher course.