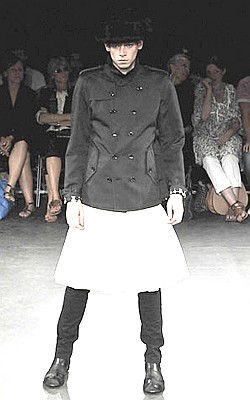 Stolen shamelessly from Downeast blog, here is the latest in haute couture from Paris. Are we being devoured from within? Yes, we are.

This poor fool doesn’t look happy about it, either. Nonetheless he was willing to parade around in that ugly skirt.

It used to be that fashion designers seemed to hate women. Now they appear to have morphed into plain old “gender” equality misanthropic idjits.

I can’t wait to see this fashion take hold in biker circles…except it would cover over all those painfully acquired tattoos, so that’s out. Maybe they can wear his cute hat?

Fashion aside (it being well known that women are more apt to suffer for fashion’s sake than are men) I must ask our male readers an important question regarding logistics:
– – – – – – – – –
how practical would this get up be whilst standing in front of a urinal, especially after a few pints? You guys would be literally rubbing elbows as you attempted to hold up this material with one hand, and with the other…well, you get the picture.

Could this cause problems? Could you sue the designer?

38 thoughts on “Manly Men are Fighting a Rearguard Action”