This post is dedicated to The Poster Formerly Known as Gordon, who sneered it into existence by posting an off-topic comment at the top of this morning’s thread. Thanks to Henrik for commissioning it, and to our Austrian correspondent ESW for writing it.

Earlier this month the Bosnian Serb fugitive Radovan Karadzic surrendered to the authorities after more than a decade in hiding. He now faces war crimes charges before the International Criminal Tribunal in the Hague.

A View on Karadzic’s Arrest from a European
by ESW

There are various thoughts going in circles in my head as I watch the first appearance of Radovan Karadzic at his trial at The Hague. What is most interesting to watch is how CNN is insinuating a conviction ahead of the trial. 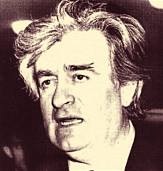 “Ethnic cleansing, creation of an ethnically pure state. Forces of Karadzic killed more than 200,000, mostly Muslims, simply because of ethnic issues,” Christiane Amanpour gushes, very obviously happy about seeing Karadzic in front the international tribunal. Again, it boils down to “bad” Serbs and “good” Muslims. That is the message the international viewer gets while watching CNN.

CNN presents, as always, only one side of the story. “People in Sarajevo are either Muslim or Croat.” Alessio Vinci reports from Sarajevo. Muslim or Croat? When did Islam get statehood so that a Muslim can be compared to a Croat? Vinci at least mentions, in passing, supporters of Karadzic he interviewed, though this interview itself was not shown. There were a couple of Sarajevan men sitting in a café in Sarajevo — while in the background a fully veiled young woman could be seen — who were happy to tell the reporter about the atrocities that they did not witness because they were seven years old at the time and out of the country.

CNN is continuously talking about Serb atrocities, while diminishing atrocities committed by the other side. And there surely must have been another side to this conflict. It just isn’t being reported on, not by CNN.
– – – – – – – – –
Like many others, I never really believed what we were shown and told about the Serb concentration camps. It was merely a gut feeling at the time, but suddenly I am being taught a different truth.

This is exactly what Austrians — and the world, for that matter — have been fed for almost the past two decades. I have a feeling that we are in for a history lesson. We will be relearning a history that has been spoon-fed to us by the MSM, by our politicians, and I daresay even the Muslims.

Perhaps you’ll also be convinced that there is a different truth, a different history out there. And it certainly isn’t what CNN, BBC, ITN, and all the others are showing us.

23 thoughts on “Karadzic vs. the MSM”