Our European correspondent Lexington read the post about the photo of the puppy that offended Scottish Muslims, and our readers’ comments that accompanied it. Here’s what he had to say in response:

I think a crucial aspect of this story is missing: this is part of the necessary training process of the dhimmis.

I do not for a moment believe that the Moslem protesting about the advertisement picturing a black puppy was an individual response. Moslems act as a gang, and they have a very clear list of those aspects of kuffar life they want changed to accord with Sharia. (I have seen long lists of what changes they deem essential in schools, for example.)

Moslems are also employed in all government departments in Britain, at the lowest and highest levels, so such an advertisement would be known in advance. The idea is this: a Moslem makes a complaint or raises an issue which flouts Sharia, and then the dhimmis rush to extend apologies, remorse, and assurances that it will not be repeated. At this point a Moslem representative organization will come forward, tut-tutting, and explain that, of course, Moslems were not really offended and that this is an example of over-reaction on the part of non-Moslems. 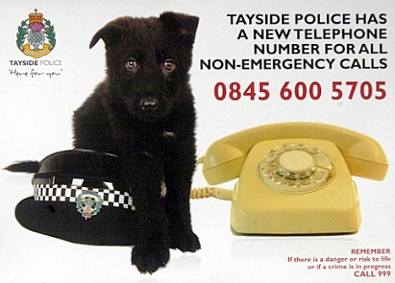 This tactic has two benefits: firstly, it appears, to a disinterested dhimmi that Moslems aren’t really to blame for all this; it’s just that dratted old PC-loving lot again. Secondly, the disinterested dhimmi now has lodged, in his subconscious, the necessary lesson of what is not acceptable to Moslems for future reference. The dhimmi will not offend the Moslem in future, and the Moslem ‘community’ will sit back, smiling contentedly, happy that the puppy — er, sorry, the dhimmi — is coming along quite nicely and will soon be fully house-trained.

I have seen this scenario happen too many times; it is very well-thought out. Clearly, some folk do more at Friday mosque attendances than merely pound their foreheads on the ground. If we continue along this line, reacting rather than acting on our beliefs and making demands for accordance with our society, we will lose, and without Moslems even needing to use a rolled newspaper on our backsides.

Hot on the tail of the original story comes the follow-up from The Courier (Tayside) as posted by Cosmosis. It conforms perfectly to my contentions.

A Moslem councillor raised the issue that it “could offend some Muslims” and that “some Muslims have been upset” followed by an explanation to the dhimmis of the Muslim view of dogs. These postcards were produced and distributed in late spring and it is now summer. They have been distributed to homes and businesses but no Moslem firms have put them up yet, it seems.

Along now comes the official Muslim representative (the head of the Islamic Centre of the town and the mosque therein, no less) to “appeal for calm” and to slightly distance the Muslim ‘community’ from the Muslim individual who has voiced concerns over the postcard and to further assure the dhimmis that there is nothing to stop them being displayed in shops. Some Muslim shopkeepers helpfully further explain that Muslims are afraid of dogs, but try not to make too much of this, thereby ensuring that the kuffar understand that any insistence upon a doggy environment is rather cruel on people who can’t help their fears.

Meanwhile, a selection of kuffar comments indicates a certain unfortunate stroppiness which will, with time, be disciplined out of them although one shows promise already with his remark “Should they (the Muslims) not wish for whatever reason to support an initiative by our local police, so be it.” (This ‘initiative’ simply listed the new telephone number for non-emergency calls to the Tayside Police Department, so why would all those reasonable Muslim shopkeepers have not put them up yet? Why, because they haven’t received them, so they say.)

But all’s well that ends well, with the assurance by the Police that “we already have an alternative design and are looking at the possibility of making these available for anyone who deems the current design to be unsuitable.” Perhaps the Muslim shopkeepers are simply waiting for the new, Sharia-compliant design? Yes, the Brits are barking mad, but we aren’t far behind.

5 thoughts on “It’s a Dog’s Life: Training to be a Dhimmi”