Our reader, Gaia, was sputtering when she sent this ridiculous tale being wagged by the Association of Chief Police Officers. These gentlemen are bent over so far they can see the upside down blue sky in between their legs.

I do hope they are being paid well for the latest dog travesty:

Police sniffer dogs will have to wear bootees when searching the homes of Muslims so as not to cause offence.

Guidelines being drawn up by the Association of Chief Police Officers (Acpo) urge awareness of religious sensitivities when using dogs to search for drugs and explosives. The guidelines, to be published this year, were designed to cover mosques but have been extended to include other buildings. 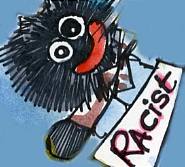 If you live in England, Northern Ireland or Wales, here is a contact page for the Association of Chief Police Officers. They warn you ahead of time “… that the use of offensive, racist or defammatory [sic] language will not be tolerated and may be subject to further investigation.” Just in case you were tempted to toss naughty language in their general direction (God knows they deserve it) please refrain. We can’t go your bail at such long distance. And Lionheart can tell you from bitter experience that if they investigate you on “racist hate speech” they’ll leave you swinging in the wind for years. Good way to keep the average citizen on a short leash, hmm?

Where Muslims object, officers will be obliged to use sniffer dogs only in exceptional cases. Where dogs are used, they will have to wear bootees with rubber soles. “We are trying to ensure that police forces are aware of sensitivities that people can have with the dogs to make sure they are not going against any religious or cultural element within people’s homes. It is being addressed and forces are working towards doing it,” Acpo said.

Problems faced by the use of sniffer dogs were highlighted last week when Tayside police were forced to apologise for a crime prevention poster featuring a german shepherd puppy, in response to a complaint by a Muslim councillor.

Islamic injunctions warn Muslims against contact with dogs, which are regarded as “unclean”.

Police dogs at present are issued with footwear only at scenes of explosions to prevent them injuring their paws on broken glass.

As someone noted in the comments recently, Saudi Arabia uses dogs for security searches, mostly at airports as I recall. And have you seen the many videos from Iraq with the mongrel dogs wandering around? Several have been “adopted” by platoons, though that may be against the rules. Do these Muslim-land dogs spontaneously generate? Where do you suppose they come from?

In other words, these Islamic injunctions are balderdash. I’ll grant the Times this: it did go so far as to quote a dissenting imam on the subject. He gives the Police Chiefs a well-deserved lecture:

Ibrahim Mogra, one of Britain’s leading imams, said the measures were unnecessary: “In Islamic law the dog is not regarded as impure, only its saliva is. Most Islamic schools of law agree on that. If security measures require to send a dog into a house, then it has to be done. I think Acpo needs to consult better and more widely.

“I know in the Muslim community there is a hang-up against dogs, but this is cultural. Also, we know the British like dogs; we Muslims should do our bit to change our attitudes.”

Hear, hear, your reverence! If you would be so good as to repeat that message far and wide in the bureaucratic circles in England, you could do much good.

John Midgley, co-founder of the Campaign Against Political Correctness, said: “The police are in effect being overly sensitive to potential criminals and not being sensitive enough to the public at large who need to be protected. These sort of things have a counter-productive effect because they cause huge friction between different communities.”

Did you know that there was a Campaign Against Political Correctness in England? Neither did I. It sounds like a much-needed corrective to the current wisdom. You do wonder what they can say, though, without being slammed by the nearest police Racist Hate Crimes Unit. Which may be why the website does not appear to be up to date, though Mr. Midgley appears to be alive and well when you google him.

Caroline Kisko, of the Kennel Club, said: “We would not condone any attempt to make search dogs wear special clothing, which could cause them distress.”

Come to think of it, the Queen is very fond of dogs. Why has she not spoken up about this cruelty? Or perhaps she did, and I missed it.

As the Baron noted, Ms. Kisko, presumably like most “persons of English background”, is more concerned about the sensibilities of dogs than she is about those of Muslims.

Come to think of it, I know plenty of Americans who much prefer dogs to people. And with good reason, they say. For example, talk to any poor soul with large alimony payments; he’ll tell you – don’t get married, get a dog instead.

Conclusion: these Police Chiefs have been left out too long in the noonday sun. Either that, or given this cockamamie initiative they just dreamed up, the Chiefs are a wee bit sensitive since their latest round of dhimmi training.

28 thoughts on “Have These Englishmen Been Too Long in the Noonday Sun?”