I’m including a screen shot of this Fox News story because I don’t think it will stay around for long after Fox’s daytime editor wakes up, has his coffee, and looks at the screen: 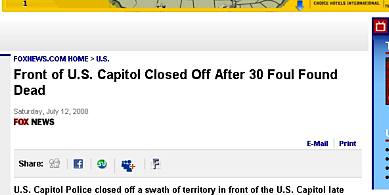 Thirty foul were found dead at the U.S. Capitol!

I immediately assumed it had to be some foul members of Congress. But which senators, which representatives? So many possible foul to choose from!

However, it turned out the victims were actually waterfowl. The poor birds were apparently killed by an excess of chlorine in the reflecting pool.

There may be some dead ducks on the Hill come November, but no legislators were included in this particular group.