Update: Honest Reporting was mistaken in its assertion that the BBC changed the headline on its article. The original BBC story is still posted here.

The same egregious headline remains in place in that article: “Israel bulldozer driver shot dead”. The other BBC stories were simply added as later articles on the same topic, and the original post was never revised.

Israel reports a new public attack which killed three or more, and injured at least forty people. There are lots of outlets for this story; I will link them at the end of the narrative. 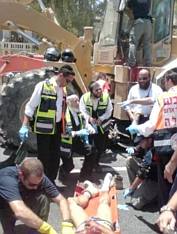 The killer, a Palestinian from East Gaza apparently acting alone, climbed aboard a bulldozer where he was employed and drove the heavy equipment down the busy street, wreaking death and havoc along the street before he was shot down.

Here is an understandably emotional report from a frantic father whose thirteen year-old daughter was there to see it as it happened:

Today at noon, in front of the Central Bus Station in Jerusalem, a father of two from the non-nation, the vile nation, (the “Palestinians”) decided that his life, his job, raising his family, supporting his family and growing old, was worth much less than the opportunity to murder Jewish women and children. So, this official Arab resident of Jerusalem who had a skilled position as a construction heavy equipment operator, took his bulldozer and began to run over and crush everyone in sight.

By the intersection, he asked a lady to back her car up so he could move his tractor, actually asking her to position right behind him, and then crushed her and her car. He crushed several occupied cars as he drove down the street, leaving a mother dead but her baby surviving. He aimed for a bus, the driver screamed for her passengers to evacuated and tried to back up…she was decapitated by the bulldozer shovel.

He aimed for another bus, taking it down as well. He sped down the street, heading towards the new Jerusalem bridge inaugurated this week…

At that point, a policewoman ran up and started firing at the driver, but large bulldozers are armored against falling debris, enough to stop pistol bullets. Another policeman jumped onto the bulldozer, emptying his clip into the cab. The murderer was hit and momentarily stunned, but was able to re-engage. The officer entered the cab and began to grapple with the driver, the bulldozer now swerving from side to side. An off duty soldier borrowed another policeman’s weapon, jumped on the bulldozer and shot the driver in the head.

I found out about this as my 13 year old daughter called frantic. She was a short distance away as police vehicles came screaming in (even 4 policemen on horses) and people were running and crying going the other way. She didn’t know what was happening, or what do to. I didn’t either, I told her to go into the bus station, which sent her towards the middle of the attack. Fortunately, it had been ended by then.

These are all just injuries to us, another atrocity. But like the 7/7 bombing in London, or the one earlier in Madrid, there are people left behind. These are people who open the door every day to silence, to the loud silence of someone who is no longer there. In the aftermath of these and many others (not to mention the USS Cole and the Lebanon barracks and the Twin Towers) souls have been maimed forever. Sometimes you wonder who are the fortunate ones – is it those who survived, maimed but alive and facing years of pain and disfigurement? Is it those left behind to mourn the absolute absence of a beloved child or those whose lives are suddenly gone, those who will never mourn again?

This eye-witness account (at one remove), as repeated by the father, is another world away from the Beeb’s chronicle (they could watch it unfold below from their office window), or the Reuters story, or the brief early version sent by a frequent tipster, Insubria87.

And then there is the Israel National News account, which calls the attack “unprecedented.” That’s true, but only in the sense that a propaganda-deluded terrorist found one more way to kill innocent people. No doubt other Arabs employed in Israel building roads will now be unemployed. I wonder who they will blame – Israel or their fellow “citizen”?

Unfortunately for their almost-zero credibility, the Beeb was caught changing its headline again. Here’s what Honest Reporting has to say:

Of course the BBC will claim it didn’t know the details, but who believes them anymore except the people they look at in the mirror?

The terrorist is a 30-year-old father of two from the Arab neighborhood of Tzur Baher in eastern Jerusalem – the same neighborhood in which the perpetrator of the Merkaz HaRav slaughter lived.

If you remember, Libya blocked any UN condemnation of that attack after it happened. How long will we have to continue to affiliate with the murderers, tyrants, and corrupt bagmen who infest the halls of the UN? How long will we let them live rent-free in our country?

How long, oh Lord, how long?

Be sure to visit Atlas Shrugs on this story. She will have lots of updates as the day and evening wears on…and as you watch the videos, note that men run toward the berserk driver, not away and out of harm’s way. One can only admire such courage.

By the way, Pamela has a link to a BBC place where you can complain about the evil complicity of the BBC.

I leave you with the ruminations of the father whose story began this post:

The culture of death rolls on, funded by the US and the EU, encouraged weekly by the US State Department and Condoleezza Rice, counting on prisoner trades arranged and approved by Prime Minster Olmert, fed by food released under fire by Defense Minister Barak, supported by rulings from the Israeli Supreme Court (which has outlawed any form of Avodat Ivrit, exclusive Jewish Labor companies which would provide only Jewish workers to a project).

This man had a good job, full rights, and a family. But MY death and the death of EVERY JEW was of more value to him than his life.

Tonight, his family is probably erecting a party tent, where they will CELEBRATE his murder spree. They will teach his children that mass murder is better than life, they will be honored for not having a father. Their family will revel and party on our blood this week. And the Israeli government will stand by and do NOTHING.

I agree with his sentiments, but to get any of them to accept responsibility for this is like hitting your head against the wall of indifference the elites have erected against common sense and survival.

18 thoughts on “Blessed are They Who Mourn? I Wonder…”