There’s nothing you can do that can’t be done.

This news story made me think of the John Lennon song because of the subhead in Al-Arabiya:

Goal is to “learn to love each other,” Sarkozy says 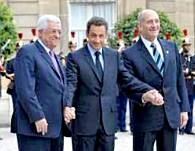 And it’s quite a love-feast that went on today — Bastille Day! — in Paris. The photo brings to mind President Bush holding hands and playing kissy-face with (then) Prince Abdullah. Here’s Nicolas Sarkozy in the middle doing a great Mr. Bean imitation with his goofy grin. Ehud Olmert, on the right, has the glassy smile of someone who’s finally gotten his mind right. And Mahmoud Abbas — Abu Mazen — is on the left, grimacing his way through this ordeal until he can get back home to “Palestine” and cash the latest billion-dollar check from the EU.

As Bat Ye’or pointed out in her interview, the intention of the EU in its dealings with the Arab world is to eliminate Israel from the Middle East, which will make the Arabs happy and thus improve relations with the countries that control Europe’s oil spigot.

But the pretend agenda is “peace”, as if we all haven’t learned after more than forty years that peace with Israel is the last thing that the Arabs want.

France urged a 43-nation Union for the Mediterranean to tackle 21st century challenges including the array of Middle East issues, which remained a hot topic of discussion at a launch summit on Sunday.

On the sidelines, French President Nicolas Sarkozy hosted talks with the Israeli and Palestinian leaders, Ehud Olmert and Mahmoud Abbas, after which Olmert said the two sides had never been so close to a peace accord.

Love each other! Why didn’t we think of that before? It’s easy — we should have listened to John Lennon.

Everybody is busy making history:

“The fact that everyone will be in the same room for the same meeting is in itself an historic event,” he said.

Yasser Arafat shaking hands with Yitzhak Rabin in the Rose Garden was an historic event, too. It turned out not to be the kind of history that Israel and the United States expected or wanted, but history has a habit of playing tricks like that.

Yet everyone goes on believing — or pretending to believe — that this time things will be different. It’s like the battered wife returning home to her violent husband for the hundredth time, thinking if only this time I don’t burn the roast, if only I keep the house clean enough, if only the kids don’t get out of hand, if only… if only…

Syria is being rehabilitated. It seems that the murder of Rafik Hariri is going to be dropped down the same memory hole that Tiananmen Square disappeared into:

Syrian President Bashar al-Assad attended the opening conference with over 40 other leaders including Olmert — the first time Israeli and Syrian leaders will have been in the same room. The two countries recently began indirect peace talks with Turkish mediation.

That diplomatic breakthrough, and an agreement on Saturday to exchange embassies with Lebanon for the first time, enabled Assad to emerge from isolation in the West three years after the assassination of former Lebanese Prime Minister Rafiq al-Hariri, which many believe was orchestrated from Damascus.

And the following seems ominous for Israel:

French Foreign Minister Bernard Kouchner said it was time the region put years of strife behind it and forge new ties with European Union states on the pressing issues of the day.

Translation: “The EU says it’s time for Israel to give the Arabs everything they want.” And Mr. Olmert is all too ready to do his part:

According to a source close to the prime minister, Olmert promised Abbas to release a new group of Palestinian prisoners as “a gesture” of good will.

An aide quoted the Israeli minister as telling the meeting: “I know that some of the members of this conference see the conflict as an obstacle… I cannot accept this. I look at my neighbors and see first and foremost neighbors.”

So the Israeli government has its head buried as deeply in the sand as anybody in Europe or North America.

Earth to Olmert: These aren’t your “neighbors” — these are people who want to drive the Jews into the sea!

But no, we’re going to have more round of John Lennon instead: Nothing you can say but you can learn how to play the game.

12 thoughts on “All You Need is Love”