I have written previously about Udo Ulfkotte, who was one of the original co-founders of SIOE, although he eventually broke with the group.

The latest news is that Mr. Ulfkotte’s anti-Islamization activities have caused his wife to be threatened with death. Here’s the article from Europe News based on a report by Udo Ulfkotte at Kopp Verlag, and translated from the German by Jürgen, via Holger Danske at Europe News:

The wife of well-known German journalist Udo Ulfkotte is being sought by thousands of Turks and Muslims in Germany and has received hundreds death threats. In a faked video on YouTube a young woman had offended Islam, Mohammed and his followers, pretending to be Doris Ulfkotte. Within a few hours countless murder threats as well as an address of the Ulfkotte family were found under the video, although they have been deleted in the meantime. Police and the intelligence service are actively engaged, and ask for the help of the populace to provide more information. 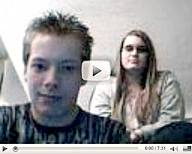 On Sunday, 22nd June, 2008, at 3:56 pm the mobile phone of Doris Ulfkotte rang. The caller pointed to very big danger, he had seen a video on the YouTube web page in which a young woman claimed to be Doris Ulfkotte, and insulted Islam in the worst manner. A few hours later the video had been already watched 140,000 times and displayed thousands of comments under it, with numerous calls for murder and the address of Doris Ulfkotte. Shortly after her telephone number appeared on the Internet, death threats by phone followed.

However, on the video are to be seen neither Doris Ulfkotte nor her husband Udo Ulfkotte (see picture). The married couple immediately disclaimed all involvement with the video after watching the faked movie, and notified the authorities. Now it is imperative to identify both persons on the video as quickly as possible, so that the case can be clarified. The population is asked to report any information to the nearest police station.

The intelligence service and police investigate every murder call and will take suitable measures against the criminals.