AMDG, who blogs at La Yijad en Eurabia, sent us this preview of a post which will appear on his blog tomorrow.

The secret Jihad of a Spanish cartoonist
by AMDG 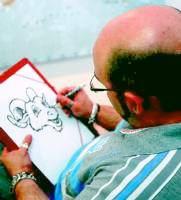 The cartoonist with initials G. L. R. is a 31-year-old Spaniard from Zaragoza, owner of a small shop selling cartoon literature, and an amateur cartoonist himself. (Spanish source: La ‘yihad’ del dibujante dual)

G. L. R. (I do not know the reason why the identity of an adult criminal is hidden) created a parallel virtual life in the Internet. In real life, he was the owner of a comic book shop. In the Internet, he was a non-Muslim Islamist militant who defended with his drawings the Arab aggression against Israel, the Jihad in Chechnya, etc. His Islamic self was nicknamed Salaam1420. The success of his drawings, which were distributed on Islamist websites and fora, made him very popular. You can find here and here some examples of his art.

He was also posting comments at Islamist fora. For instance, this one [see AMDG’s post tomorrow for the image] claiming that Spain is as Muslim as Egypt even if it currently ruled by infidels.

The cartoonist was arrested on March 13, 2007, on charges of “advocacy and apology for terrorism”. His declarations show a rather vulnerable personality:

“As a teenager looking for a spirituality that I could not find in Catholicism. I found Islam. At 15 I stopped eating pork, I began to fast for Ramadan and I told my friends to call me Hassan”. He learned about Islam on the Internet: “because I felt shame, I never went to the mosque to become a Muslim.”

“I do not know at what point I lost the north. But I never justified Al Qaeda. If a terrorist had contacted me, I would have denounced him”. He explains that most European Internet Islamists “are radical young wannabes.” He now assumes his mistake. “I repent. I could have used my talent for positive things but acted destructively. In from of the judge, I saw that my pictures could incite to violence. I want now clear up my past; I collaborate with a children’s magazine.”
– – – – – – – – –
His case brings echoes of the utilization of mentally handicapped youths — some of them new converts — by radical Islam. In any case, all is good than ends well, if his repentance is sincere.

You may wonder whether his arrest is comparable to Nekschot’s, the Dutch cartoonist. It is not the same indeed. This is not simply a case of freedom of expression, but a real case of advocacy and apology of terrorism. His cartoons were intended to move to action: Muslim invasion and takeover of Spain, shooting of coalition forces in Baghdad, while Nekschot’s cartoons are intended to religious believers outraged. We may feel offended by them, but we are not affected by his drawings.

Take for instance this one by G.L.R., which I consider among the most disturbing: 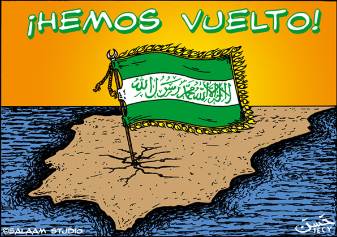 The legend says “We have returned” and refers to the fact that the Moors expelled in the XVI and XVII centuries are returning, and returning with the intention to rule. You can see a flag stabbed on Spanish territory, as if taking possession of it.

You may have noted that the flag is similar to the Arabian one, green colour and with an Arabic legend which I assume is the Islamic declaration of faith (“There is no God but the only God, and Mojamá is his prophet”; a tautology followed by an unacceptable assertion). But it not the Saudi Arabian flag; it is the flag of the Spanish region of Andalusia.

This flag was designed by Blas Infante, who was officially declared Pater Patriae of Andalusia a few months ago. I discovered only recently that he converted to Islam, an issue that regional politicians prefer not to tackle. He composed also the lyrics of the regional anthem. Wikipedia has a translation to English:

The Green and White Flag
returns after centuries of war
to tell of Peace and Hope
under our Land’s sunshine.

Andalusians, Stand up!
Cry for Land and Freedom
May they be for a free
Andalusia and Mankind.

The anthem does not hide what Blas Infante had in mind. This is a good example of the strategy of the current cultural war against the West. The Spanish political class, both left (PSOE) and right (Partido Popular), acclaim a nearly hidden Muslim as Andalusian Pater Patriae. Then, the flag that he designed and that has been given official recognition is used as a standard for the Jihad against Spain.

The repression of Islamic terrorist activities cannot work when the political and academic class is surreptitiously working in favour of Islam.

7 thoughts on “The Secret Jihad of a Spanish Cartoonist”