If you live anywhere near Sydney, Australia, the name “Bilal Skaf” is synonymous with “Racist Lebanese Gang Rapist”. Of course, since Mr. Skaf isn’t white, he can’t actually be a racist, but those poor benighted pale-skinned Australians don’t know that.

Mr. Skaf was the ringleader of a gang of Lebanese-Australians who preyed on white teenage girls, and this makes some Australians think that he is a racist who committed hate crimes against white Australians. But organs of the knee-jerk liberal press view the anger directed at Mr. Skaf as the reaction of right-wing extremists who have seized the opportunity to take advantage of uninformed public opinion and generate a backlash against the Lebanese minority, most of whom are innocent and law-abiding, and don’t deserve the enmity generated by the case.

Some background on Bilal Skaf is in order. In a series of trials he was convicted and sentenced for masterminding and participating in several gang-rapes back in 2000. His sentence was reduced on appeal, and then increased again when the convictions for later offenses kicked in.

And now, as if to break new ground in the definition of the word “chutzpah”, Bilal Skaf is protesting that his notoriety as a convicted gang-rapist precludes his ever getting a fair hearing in an Australian court of law:

Convicted rapist Bilal Skaf claims his name is so synonymous with a Sydney gang sex crime he will never be able to get a fair trial.

And the 26-year-old is asking the NSW Court of Criminal Appeal to reduce his sentence, saying his victim — who was held at gunpoint and raped by up to 14 men — suffered no significant harm.

Skaf brought his case before the criminal appeals court for the third time today, asking for his latest conviction to again be quashed or his sentence cut.

In searching for photos of Mr. Skaf to use for this post, I noticed that very few are available. All the news articles I could find used the photo shown at left in the pair below. 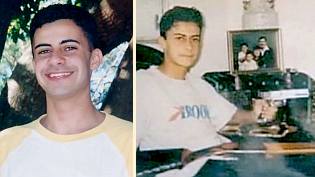 As you can see, that particular photo makes Bilal Skaf look like a choirboy — if in fact the Muslim Lebanese-Australian community had any choirboys.
– – – – – – – – –
But look at the other photo, the one on the right — which can only be found on various hateful right-wing extremist blogs and other organs of Australian patriotism — in which Mr. Skaf posed holding a handgun with a rifle in his lap. Not quite the same fellow, is he? But the MSM obviously wants its readers to think of him in only one way.

“If an advertiser were trying to achieve a brand name for a gang rapist, Bilal Skaf has achieved this aim. The product for gang rapist in western Sydney is Bilal Skaf,” Mr Haesler said.

“(Skaf’s name) has become synonymous with rapes committed by people of the Muslim faith in western Sydney and… with gang attacks on young women.”

Is that an unreasonable situation for Bilal Skaf to find himself in? His crimes have been established by the time-honored English Common Law system of a trial by a jury of his peers, and the testimony of witnesses has been entered into the public record supporting the verdicts against him. Why shouldn’t he be the poster boy for racist Lebanese gang rape in Australia? What other fate would be more suitable?

The poster boy helped earn his reputation by telling one of his victims, “You deserve it because you’re an Australian”. That is: “Because you’re white, grew up speaking English, and accept the Anglo-Saxon norms of Australia, I am justified in treating you in the most bestial fashion.”

Bilal Skaf didn’t pluck this attitude out of the air. He was able to think this way, to plan his crimes and carry them out, because at least a significant subset of the Lebanese community in Australia shares it with him.

Yet many people, particularly those in positions of civil authority in the Anglosphere, prefer to deny this fact, minimize it, or ignore it.

But not everybody is turning away from the uncomfortable truth. At Mr. Skaf’s sentencing, the judge had this to say:

The offender was the leader of a brutal gang of rapists who, on three occasions, raped four young women. His activity and those of his gang spread terror in Sydney in August 2000 just before the commencement of the Olympic Games.

The activities of the gang were organised by the use of mobile phones, and there was a considerable degree of planning and coordination involved in each set of attacks. As is common with rapists, the gang members treated each of their victims with callous indifference and considerable cruelty.

The courts must attempt to protect society from the possibility that those who have been caught will engage in this type of activity again.

What this trial showed was that [Bilal Skaf] was the leader of the pack, a liar, a bully, a coward, callous and mean.

He is, in truth, a menace to any civilised society.

As I have earlier remarked these crimes were carefully planned and coordinated. The degree of planning and coordination distinguishes these crimes from other cases of gang rape which have been reported from time to time, which are often, if not usually, perpetrated by intoxicated men who have seized an opportunity which has been presented to them.

None of these crimes happened on the spur of the moment. None of the assailants was in any way affected by alcohol or drugs. In my opinion, the evidence of the three trials establishes beyond reasonable doubt that the offender was the leader of the gang on all occasions and must be regarded as the worst of all offenders. He is a menace to society. He has declined to give any explanation of the reasons for these attacks and refuses to express any remorse or contrition.

The alarming trend is not the heinous rapes themselves — although they are alarming enough — but the desire of the Western elites to pretend that they are something else, that they are ordinary crimes committed by high-spirited, rowdy, or misguided “youths”.

The Sydney gang-rapes — like those in Sweden, Britain, Belgium, France, and elsewhere — are a civilizational attack. We, the people of the West, are perceived as a culture on the way out, a spent scene.

The rapist asserts the dominance of himself and those who are most like him. Any passive acquiescence to the crime makes it all the more likely that it will recur.

Bilal Skaf deserves to be the poster boy for gang rapes in Australia. Let’s continue to keep him in mind.

8 thoughts on “The Poster Boy For Gang Rape”