Our Austrian correspondent ESW has translated an article from Die Presse concerning the integration of Muslims in Austrian schools.

This article is a textbook example of what might be called High Multiculturalism. Some of the characteristics of this ideology are:

“Cultures must be mixed”
by Daniel Kraker and Martin Wolf 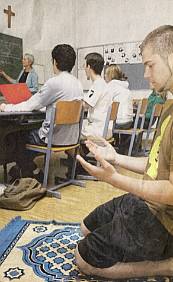 “Cultures must be mixed,” says Mohammed Fahad, owner of a pub catering to young people in Innsbruck (the provincial capital of Tyrol). It was his goal to bring different cultures together, and he adds this “togetherness” of “indigenous” and “foreigners” has been friction-free.

In our school there are classes with Muslims integrated so well that they aren’t distinguishable from other students. The school principal sees no problems. However, there are very few Muslims in our area. As a result, general conditions are good, especially since most Muslims belong to the second generation of immigrants.

But this does not mean that there are no problems. Muslim students enjoy strong cohesion. One can see them standing together during school breaks. Near the buffet, in the garden, near the door. One has the feeling that one is not welcome. This is exacerbated by their speaking Turkish amongst themselves. This behavior evidences very little interest in integration.

If Muslims go out on their own, they do mingle with others, trying hard not to attract attention, speaking German. They seem more open and more likable.

Otherwise my big brother will come to get you

Muslim students generally have a different way of socializing. They go to different pubs, drink no alcohol, and treat girls differently.

When the little ones start attending our school the cultural differences are not yet seen, except that everyone knows that Muslim girls are not to be bothered, otherwise they get their older brothers, and that might end badly. Over the years the differences appear. However, there is still a chance to take countermeasures; for instance, teach the little girls to solve problems on their own.

Our surveys among students and teachers show another point: Many of our Muslim consider themselves integrated; however, they also believe they are discriminated against. Thus, there is still a long way to go to reach actual acceptance and equality of opportunities. We are only at the beginning.

7 thoughts on “The Mandatory Mixing of Cultures”