The current political structures in Europe can only be sustained if the flow of information is restricted. Since most media are either state-owned or in thrall to the same politically correct ideology shared by the elites who run the national governments and the EU, restriction is not difficult.

In fact, it is this convergence which ensures not only an iconic BBC-style uniformity of message, but also locks out any credible competing ideas.

Direct repression is another weapon in the elitist arsenal. Thus, when Channel 4 and Charlie Hebdo veered from accepted practices, they were hauled into court. The fact that both outlets escaped legal punishment does not reduce the significance of the treatment doled out to them. Being taken to court is definitely a deterrent to free speech; defending against such egregious practices is very expensive.

There is a third form of ideological control being practiced in the Netherlands now: removing any state protection from dissenters who are under threat by violent opponents:

Ms. Verdonk, like Wilders, is a staunch critic of both immigration and the rapid Islamization of the Netherlands. She must therefore be brought to heel:

The National Anti-terrorism Coordinator (NCTb) has decided to withdraw personal protection from MP Rita Verdonk. She is baffled, she said on TV programme Knevel&Van de Brink. 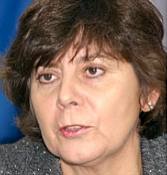 According to Verdonk, Justice Minister Ernst Hirsch Ballin informed her by letter last Tuesday that her bodyguards would be withdrawn on 4 June. She is only still being ‘escorted.’ This means that instead of permanent bodyguards, she will only have a car behind her following at a distance.

Verdonk is the leader and founder of Proud of the Netherlands (TON). The party, currently running second in the polls, was set up in April. Verdonk is critical of Islam.

Verdonk has decided to halt a tour through the country with immediate effect. This is due to the “incomprehensible and irresponsible” decision of NCTb, she said. “I feel powerless.”

‘Iron Rita’ also complained she was left in the dark about the reasons for the NCTB’s decision. She said she asked Premier Jan Peter Balkenende for the underlying documents based on which the NCTb determined that the threat level against her had declined. “But I am not getting these documents.”

Verdonk says she is in danger. Recently, she was ‘welcomed’ on a visit to Friesland by far-left activists carrying banners with texts like ‘clear Rita away.’ And in her street, three Muslims were recently arrested who were taking photos of her house, she told Knevel&Van de Brink.

The NCTb confirmed that the guarding of Verdonk “has changed.” A spokeswoman: “There is a new mix of measures, geared to the current threat level.” NCTB chief Tjibbe Joustra himself added on Radio 1: “Fear is a subjective emotion”.

Verdonk, when she was still Integration Minister, came to be closely guarded because there was a realistic threat of an attempt being made on her life. As MP as well, the threat remained of such a nature that bodyguards were considered necessary. But NCTb sees no need for bodyguards any more, despite the recent political murders of Islam critics Pim Fortuyn (2002) and Theo van Gogh (2004).

Verdonk said yesterday in De Telegraaf newspaper: “Muslim radicals and leftwing extremists know one thing: If I come to power, then I will tackle them.” (…) “I do not feel safe.” (…) “You do not have to google for long to come across very ugly things about me!”

The notable thing about attempted state control of public opinion is how ineffective it is. Despite the uniformity of message found in the media, despite the silencing of public dissent, despite the climate of fear that keeps people from open discussion of the issue, the Dutch people are remarkably politically incorrect in their opinions:

Two-thirds of the Dutch want to ban construction of large mosques. Sixty-five percent of respondents ‘agree’ or ‘agree completely’ with this, according to a survey commissioned by TV programme Netwerk and Nederlands Dagblad newspaper.

Bureau Intomart GfK surveyed 1,386 people about Islam. Among the Dutch, 59 percent believe this religion will in 40 years time determine the complexion of the Netherlands at least as much as Christianity does now. A similar percentage terms the growth of the number of Muslims in the Netherlands threatening to Dutch culture (57 percent) and to religious freedoms (53 percent). Additionally, 61 percent do not believe that radical movements within Islam in the Netherlands will disappear by themselves.

The concern about Islam is also widespread among supporters of parties that are known as Muslim-friendly. Among Labour (PvdA) voters, for example, 56 percent support a halt to building of large mosques – while around 80 percent of the Muslims in the Netherlands voted PvdA in the last elections.

Among supporters of other parties, backing for such a measure is comparable or even greater. Only the backing among supporters of the leftwing Greens (GroenLinks) at 30 percent and centre-left D66 (39 percent) shows a majority against halting big mosque-building.

This is yet more evidence that the current official policy is to lean harder and harder on the lid of this boiling cauldron. But one thing is certain: eventually the strength of the government’s hand will fail, and scalding water will explode across the Low Countries.

7 thoughts on “The Islamization of the Netherlands”