Last month we posted Part 1 of a two-part series of articles by Sergei Bourachaga. He has asked us to interpolate the following article between those two parts, in order to provide some explanatory material for Part 2.

Islam, The Koran, and “The Mostapha Akkad Paradox”
by Sergei Bourachaga

Most readers by now are expecting Part 2 of my article titled “The Koran and the Psychopathology of the Prophet”. I have not reversed my position and in the near future Part 2 will be submitted for publication.

I have a compelling reason for writing this article. The “Mostapha Akkad Paradox” mentioned in the title, is something known neither in the Western world nor in the Islamic countries where the average person on the street might be able to tell you who Mostapha Akkad is, but definitely will have no clue about the nature of the “Paradox”. I believe I am the first person to attach the name of Mr. Akkad to my personal observations of Islam, the Koran, and the dark side of the Islamic Jihadist movement’s revival since the Soviet invasion of Afghanistan, and the “Divine Victory” (achieved by the soldiers of Allah) that ultimately paved the way for the collapse of The Soviet Union (according to the Islamic interpretation of events).

In Part 2 I will be referring more than once to “The Mostapha Akkad Paradox”, and it will be appropriate to define and explain it before any frequent usage of something too obscure for the rest of the world to make sense of. 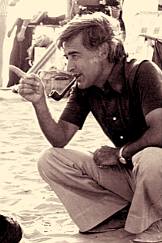 Who is Mostapha Akkad? Born in the city of Aleppo, Syria (1933-2005), he moved to the U.S. in 1954 and resided in Los Angeles where he pursued an academic career in art and cinematography. He received from UCLA a B.A. in “Theatre Arts” and an M.A. in “Cinema Studies”.

He launched his professional career with MGM Studios then moved to CBS until he thought he was ready to have his own production company, which he established under the operational name of “Akkad International Productions”. He produced and directed several documentary programs and TV series, but he did not achieve an earth shattering success, or gain international recognition until the Libyan president Col. Muammar Qaddafi decided to invest US $30,000,000 in a movie project under the directorship of Akkad, to familiarize the rest of the world with the Libyan popular hero Omar Mukhtar who waged a guerrilla warfare against fascist Italy.

In 1981 Akkad delivered the finished product, and launched in several capitals the movie “Omar Mukhtar: Lion of The Desert”. The Colonel literally saved Akkad from the brinks of financial ruin due to tragedies that seriously undermined his reputation and financial destiny in the late 70s.
– – – – – – – – –
In 1974, Akkad announced to the US media his intention to launch a project very dear to his heart. A film he believed would bridge the gap between the Western misconception of Islam (The Perfect Religion of Peace) and the genuine nature of a “spiritual” tradition adopted by millions of followers on planet earth. After two years of hard work, he produced two versions of the same movie. One titled “Mohammad, Messenger of God” for the Arab/Muslim market, with a cast of Arab actors and Arabic conversation, and an English version with US actors titled “The Message”, targeting the US and European markets. In a press release to the media a few weeks before the official inauguration of the film “The Message”, Akkad stated that:

“I did the film because it is a personal thing for me. Besides its production values as a film, it has its story, its intrigue, its drama. Beside all this I think there was something personal, being Muslim myself who lived in the west I felt that it was my obligation my duty to tell the truth about Islam. It is a religion that has a 700 million following, yet it’s so little known about it which surprised me. I thought I should tell the story that will bring this bridge, this gap to the west.”

Shocking events, where reality is stranger than fiction, turned Akkad, the Arab hero of Hollywood, into a very disillusioned follower of Islam. The week the film was scheduled to premier in the U.S., Muslim Salafist terrorists staged a siege against the Washington D.C. chapter of the B’nai B’rith under the mistaken belief that Anthony Quinn played the role of the Prophet Mohammed in the film, The Muslim radicals threatened to blow up the building and kill dozens of hostages unless the film’s opening was cancelled because under Islamic laws the Prophet cannot be depicted under any form or shape. The standoff was resolved without the destruction of the building or the death of any hostage. A police officer who was the first on the scene of terror lost his life. Akkad’s reputation was badly tarnished, and his film’s box office revenues in the US and Europe never recovered from the unfortunate consequences of Islamic blind rage based on the wrong assumption that an actor depicted the Prophet in a movie.

Akkad’s painful experiences with his “brothers in Islam” did not end with the B’nai B’rith tragedy of Washington D.C. Saudi Arabia launched a fierce struggle against Akkad to ban the release of the Arabic version in the Muslim countries. Explanation provided by Saudi Ministry of Islamic Affairs — and this may sound very bizarre to the Western mind — was that in one scene Akkad depicts the shadow of the camel mounted by the Prophet, a blatant insult directed at the creature of light, the Prophet Mohammad. How can he give a shadow to an animal mounted by a creature of light? What is so difficult for a devout Muslim like Akkad to understand? A light does not have a shadow, nor does the animal he mounts have one.

Bad judgement for Akkad. He honestly thought that, according to Islamic laws he had mastered since childhood, Mohammad cannot be depicted on-screen, and no voice can be attributed to him, and he refrained from doing both. He consulted several highly respected Muslim clerics in the US and he was told that the Islamic rules mentioned above cover also the wives of Mohammad, his daughters, and sons-in-law. He didn’t have any problem in avoiding all the prohibitions during the filming process. But the camel of the Prophet, as far as he knew, was not on the “Islamic Prohibition List”.

Finally in the early 90s, after digitally altering the shadow of the camel, a Saudi TV station aired the movie to its viewers and thus the ban was lifted and the Saudi green light was given for the wider release of the Arabic movie in Muslim countries worldwide.

Akkad’s painful odyssey with Islam did not end with the Saudi consent to give the long overdue credit to his achievements. On November 11, 2005 while attending the wedding reception of his daughter Rima, held at the Hyatt Hotel in Amman-Jordan, Akkad, his daughter, and 58 other guests died in an inferno unleashed by three suicide bombers who walked into the hall and detonated the explosives strapped to their bodies. The mastermind of the operation was Abu Musab Al Zarkawi, a trusted lieutenant of Ousama Ben Laden, who thought that the Hashemite King of Jordan, whose ancestors have a direct lineage to the Prophet’s tribe, was a puppet of The West and betrayed Islam to ensure the permanent control of his throne.

“The Mostapha Akkad Paradox” rests on several key questions mostly centering on “The Holy Book” of Islam, the Koran. Written in Arabic to promote monotheism to Arab pagans, why is it that so many Arabs have failed dramatically to understand something written in their own language? Akkad was born in an Arab country (Syria) where he lived for 21 years and then moved to the West. He mastered the Arabic language, considered himself a devout Muslim, struggled hard to introduce Islam through his profession to Westerners, yet his “brothers in Islam” were not fully convinced that his dedication to Islam was genuine, and tragically he became the victim of the fanatical hatred permeating the pages of the Koran, which clearly warns Muslims like Akkad to stay away from the “People of the Book” (Jews and Christians) and highlights to them the dire consequences that no Muslim should dismiss very lightly;

“Let believers not make friends with infidels (Jews and Christians) in preference to the faithful (Muslims).” — The Koran 3:28

“Believers (Muslims of this planet), do not make friends with any men other than your own people. They (the infidels — Jews and Christians) will spare no pain to corrupt you. They desire nothing but your ruin. Their hatred is clear from what they say, but more violent is the hatred which their breasts conceal.” — The Koran 3:117

Perhaps with “The Mostapha Akkad Paradox” the time has come for the West to stop pretending that the “Naked Emperor” is fully clothed and deserves absolute respect, and closely examine the findings of Prof. Gerd Puin, who, after a meticulous study of more than 15,000 sheets of Koranic manuscripts discovered during massive renovations of the Great Mosque of Sana’a, in Yemen (1972), declared that:

My idea is that the Koran is a kind of cocktail of texts that were not all understood even at the time of Muhammad. Even within the Islamic traditions there is a huge body of contradictory information, including a significant Christian substrate; one can derive a whole Islamic anti-history from them if one wants. The Qur’an claims for itself that it is ‘mubeen,’ or clear, but if you look at it, you will notice that every fifth sentence or so simply doesn’t make sense. Many Muslims will tell you otherwise, of course, but the fact is that a fifth of the Qur’anic text is just incomprehensible. This is what has caused the traditional anxiety regarding translation. If the Qur’an is not comprehensible, if it can’t even be understood in Arabic, then it’s not translatable into any language. That is why Muslims are afraid. Since the Qur’an claims repeatedly to be clear but is not—there is an obvious and serious contradiction. Something else must be going on.

This confusion which is part and parcel of “The Mostafa Akkad Paradox” has even affected some 40,000 Saudi clerics, who casually provided to their followers 40,000 different interpretations of the same “Holy Book” — the Koran. Alarmed by the widespread chaos of misunderstanding the Book, the Saudi Ministry of Islamic Affairs decided to retrain its 40,000 Imams after sacking 1000 of them for threatening the national security of the Kingdom with their radical views rooted in the Koran (BBC News, “Saudis to retrain 40,000 clerics” 2008/03/20).

How far should the West go in tolerating the intolerance preached by a “Holy Book”? Before we answer that question, let us reflect with cold rationalism on the following statement of the British novelist Dorothy Sayers:

The statement clearly mirrors the sad state of affairs currently shaping and coloring the Western attitude of indifference toward the abuses committed in our midst in the name of imposing Allah’s will on the infidels of this world.

5 thoughts on “Islam, The Koran, and “The Mostapha Akkad Paradox””