If you’re an American, what comes to mind when someone says “June 6th”? You reply, “Ah, yes! I remember! It’s the birthday of that 17th century Spanish painter, Diego Velázquez.” And then your office mates gather ’round the water cooler and lift a paper cup in your shared fond memories of ol’ Diego. Right?

What is wrong with Google? First they ignored Memorial Day, and now June 6th has been transgooglified from our cultural recollection of D-Day into an emblematic farce representing nothing. Diego Velázquez indeed! It would have been less insulting simply to leave their logo unadorned. And, yes, I do think they know this. Whatever else one may say about Google, the people who run it aren’t stupid.

I was going to post today on this book, but given Google’s uncivil and rude behavior toward the many people — veterans, spouses, siblings, children and grandchildren — of those who died on the Normandy beaches on June 6th, 1944, I am determined now to make recompense for at least one of the deliberate anti-American snubs that Google has taken to flaunting of late. 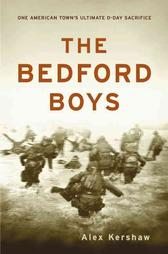 For my birthday, the fB gave me a copy of The Bedford Boys: One American Town’s Ultimate Sacrifice. Since our family all share the bookaholic gene, we give one another books presents that we want to read. And if the recipient should leave their gift lying around unread for more than a week or so, then it’s up for grabs. Fortunately, I started on it the day after receiving The Bedford Boys, so the pages have my peanut butter sandwich stains on them. These marks are considered prima facie evidence of reading rights.

Alex Kershaw, a Brit, wrote this book to honor the boys of Bedford, Virginia, a place he describes as “a quintessentially English town” at the start of World War II. And so it was, having been settled by the English in the 18th century:
– – – – – – – – –

By 1754, the town lay at the heart of arguably the most bucolic county in all Virginia: 764 square miles of rolling hills and lush valleys with mountains reaching 4,200 feet above sea level. The county was named after John Russell, the fourth duke of Bedford, who served as Britain’s secretary of state before the Revolutionary War.

The 1930’s were the years of the Great Depression. At the beginning of the decade, farm families were holding on by their fingernails, often earning less than a thousand dollars a year. For this reason, the young men of Bedford eagerly joined the National Guard. They were all well aware of their town’s long history in America’s wars. Joining up in a local militia unit seemed the natural thing to do. Besides, you got a dollar a week for showing up at drill practice and for two weeks every summer there were annual exercises, a kind of military summer camp. For boys who seldom left Bedford, it was an entertaining time. In the August exercises of 1939, the Bedford Boys re-enacted the First Battle of Manassas against a group of guardsmen from the North. The Confederates wore grey armbands, the Union, blue. Needless to say, Bedford won. Going home with defeat hanging over their heads would never have done.

The mobilization of the National Guard began well before December 1941. Some of the boys considered joining the regular Army, but by October 1940 their group, Company A of the 29th Division, was mobilized into the federal army for a year.

There were months of preparation — finding people who could fill in on the family farm, terminating what jobs there were, making arrangements for their parents, and yes — writing wills and buying life insurance.

The Bedford Bulletin noted that on February 3, 1941:

“…six officers and ninety-two enlisted men of Company A, 116th Infantry…were duly inducted… The ceremonies were brief but impressive as the khaki-clad line took the oath of transfer and allegiance…In and around the armory, young stalwart men wearing their country’s uniform cast an atmosphere reminiscent of the war-torn days of 1917-18…Induction into the United States Army adds credit to that great organization of fighting men who know no defeat; and upon whom …hangs the future of this nation.”

In many places, such sentiments can no longer be said aloud, in public. However, the small towns of Virginia, Tennessee, North Carolina, etc., still write in the old style when one of their children falls in battle in Iraq or Afghanistan.

It would be three and a half more years before the Bedford unit would meet its fate on Normandy Beach. Between 1941 and June 6 1944 there lay years of training, homesickness, and more training. There also lay an ocean between them and home, not to mention the culture shock of being in a country whose inhabitants spoke English after a fashion, but did nothing to bring forth memories of home. One thing was certain, though, the Bedford boys knew the English were bearing the greater brunt of the war in the number of people killed and injured and the severe rationing that marked those times.

They landed in England in October 1942, eventually being garrisoned in an old Army base in Salisbury Plain where they promptly came down with severe epidemic of scabies, brought on by the straw they stuffed in the mattresses to be used for sleeping.

But that was just for openers. As soon as they’d recovered…

…began the longest training program any American infantrymen endured in World War II. It would last for twenty months, from October 1942 to May 1944. The US Chiefs of Staff had not yet decided when to invade Europe and they were concerned about the American forces’ lack of combat experience and rigorous training. So they opted to turn the 29th into as strong an invasion force as possible. For seven days a week, broken once a month by a forty-eight hour pass, Company A was pushed to its physical limits. Fifty men from Bedford had arrived at Tilworth. Each week, that number fell as one man after another was weeded out or assigned to a different unit.

The 29th’s commander wanted to prove that these National Guardsmen were as ready for battle as any other outfit in the US Army. And no doubt they were. But tough, physically fit men — including the A Company from Bedford, were plopped into the English Channel on a dark, stormy night. They rode into the virginal sand of the Normandy beaches on inadequate troop carriers. Air cover was supposed to have softened up the beach fortifications prior to the landing of the troops. If nothing else, the prior attacks would have made craters enough for men to hide in or duck for cover as they got their bearings.

None of that happened. Company A was prepared as the first group to move into Omaha Beach. A sub-lieutenant guiding the LCA into shore noticed that the men were over-burdened with sixty-pound packs, struggling to stand in gale force winds as they prepared to go ashore. The six LCAs bringing them in steered a diagonal course in seas rougher than those which had caused General Eisenhower to postpone the first operation.

The tanks that were to arrive ahead of the infantry were not on the beach; they were still aboard groups of LCTs. These were essential to providing Company A with cover as they advanced onto the beach. That was the theory.

The reality was much harsher. Some men, loaded down with sodden, heavy packs, drowned before they made land. Others were cut down by German gunfire, lines of men lying on the sand. The Bedford boys were dying in quick order…

It was not until July 11 that the last of the Bedford Boys who had landed on Omaha Beach was killed. This was the same day that the official telegrams from the War Department began to come in on the teletype at the drug store at home. It was official: killed or missing in action, many of the Bedford boys would never be coming home. Slowly through the day, as telegrams continued to arrive, they were given to trusted community members to deliver to the families.

By then, the Normandy beach fortifications had long been cleared and the infantry had moved on. And the war moved on, too, from VE Day to VJ Day and the celebrations of happiness and relief that the killing was finally over. The nation began its postwar recovery.

But Bedford couldn’t recover. Twenty-two of its boys had died at Normandy. Only two of the soldiers had left young children behind. Where those young men and their families should have been was an aching crater, one that would never fill in completely.

As time wandered on memorials were erected to The Boys. Finally, in a fitting act of recompense, the national memorial honoring the fallen soldiers of D-Day was opened in 2001. President Bush laid the first memorial wreath on June 6th.

All the Bedford soldiers of Normandy are gone now. There will be no more first-person accounts of June 6th, 1944. But there is the National Memorial in Bedford. If you can’t go there, here is a photo gallery that leads you around the memorial from the Overlord Arch to the Purple Heart monument. It is an impressive tour.

And yet, instead of this, Google treats us to its cute joke: a celebration of a Spanish painter who may be a cultural icon to the Spanish, but is without any context here, in this country on this date. This is what multi-culturalism means: the obliteration of your culture’s memories and history and their replacement by meaninglessness.

This country has been good to the Google corporation. It is a shame they choose to denigrate the place which gave them the opportunity to become very wealthy and influential. While they did indeed make the most of their opportunity, the opportunity itself was quintessentially American. Such lack of gratitude is deeply saddening.

I wonder what the people of Bedford would say?