Steen has posted an article with photos and a video about Geert Wilders’ recent visit to Denmark. Mr. Wilders gave a speech at the Danish Parliament Building in Christiansborg at the invitation of Trykkefrihedsselskabet, the Free Press Society, under the leadership of Lars Hedegaard.

Steen’s article is mostly in Danish, but Geert Wilders’ speech is in English, and I have embedded the video below.


Discussing the reason he named his movie “Fitna”, Mr. Wilders said that the Arabic word can be translated as “ordeal”, and that “Islam is the ordeal with which the West is currently confronted.”

Below is a photo of Geert Wilders with Lars Hedegaard, the Chairman of Trykkefrihedsselskabet: 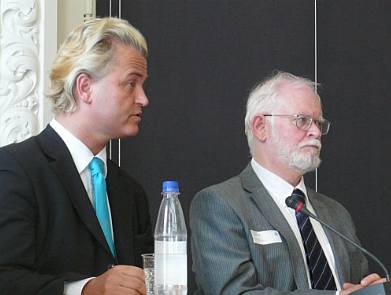 Visit Steen’s blog for more photos. His post from yesterday has high-resolution versions of these pictures and many others, including one of Mr. Wilders being greeted by Pia Kjærsgaard, the leader of the Danish People’s Party.

22 thoughts on “Geert Wilders’ Speech at the Danish Parliament Building”