Readers who live in the Wretched Hive of Scum and Villainy, a.k.a. Northern Virginia, may want to brew a pot of joe a little earlier than usual tomorrow morning and swing by the demonstration at the Islamic Saudi Academy in Alexandria. It’s on Richmond Highway — which I think of as Route 1 — down near Mt. Vernon, between Hybla Valley and Woodlawn.

Here’s the press release that was just sent out by a coalition of Counterjihad groups. It will give you an idea of what the demonstration is about.

The Traditional Values Coalition, ACT! For America and the Virginia Chapter of the United America Committee and other national and Virginia groups will hold a demonstration:

A federal commission reported the academy uses textbooks which advocate violence against and intolerance of non-Muslims. TVC has asked the U.S. Justice Department to investigate activities at the academy and the Fairfax County Board of Supervisors’ role in leasing the county-owned building to the Saudi Embassy in Washington. 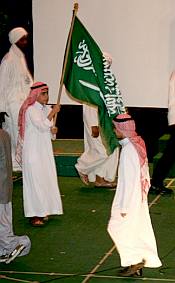 On June 9th, Fairfax County Police arrested the Director General of the Islamic Saudi Academy (ISA), Mr. Abdalla I. Al-Shabnan, on the charges of Obstruction of Justice without Force (VA Code 18.2-460). Charged and released on the same day, Mr. Al-Shabnan is out on his own recognizance as he awaits his first hearing at Fairfax County General District Court on August 1, 2008, at 9:30 a.m.

Mr. Al-Shaban’s arrest stems from an investigation into the ISA’s alleged failure to comply with State requirements for reporting child abuse. According to authorities, instead of reporting the child abuse, Mr. Al-Shabnan deleted the report, contacted the student’s parents, and recommended psychological counseling for the young victim. Mr. Al-Shaban’s June 9 arrest comes after a May 23rd police search of the ISA where they gathered evidence that has contributed to the charges against Mr. Al-Shabnan.

The ISA has been at the center of controversy for many years. A 2007 United States Commission on International Religious Freedom (USCIRF) report recommended to the State Department to call for the closure of the school. The 2007 USCIRF report prompted a coalition of concerned grassroots organizations to request the Fairfax County Board of Supervisors to delay the renewal of the ISA lease until a Federal investigation into the ISA was completed. During the May 19 Fairfax County Board of Supervisors hearing, County Supervisors dismissed concerns as slanderous, bigoted, and unfounded. During the course of the hearing, Gerald Connolly, Fairfax County Chairman and Democratic Candidate for the 11th Congressional District, apologized to Mr. Al-Shabnan for what he deemed slanderous accusations that impugned the integrity of the Islamic Saudi Academy.

Since that May 19 hearing, the Mr. Al-Shabnan has been arrested and the USCIRF has confirmed ISA textbooks justify murder as an Islamic right.
– – – – – – – – –
Only Supervisor Gross has responded to the issue, and she continues her support for the ISA, and its textbooks that contain passages filled with hate and incitement to violence. Chairman Connolly has yet to retract his apology to the ISA and Mr. Al-Shabnan. Supervisor Hyland has not yet commented on whether the texts cited in the USCIRF report are the similar to those he identified as “texts of concern” during his independent and undocumented investigation of the ISA.

These hateful passages remain despite a 2006 US State Department request for the ISA to remove all insensitive and offensive content from textbooks. The ISA’s non-compliance with the 2006 US State Department request has not been accounted for and raises concerns about what the ISA, as an extension of the Saudi government, considers offensive, and the level of accountability they have to their local hosts and Federal government.

Since the US Treasury Department still considers Saudi Arabia as one of the leading financiers of terrorism, and USCIRF reports identify Saudi Arabia’s education as filled with incitements to murder as a religious freedom, the US State Department has not commented as to whether they will extend this policy and allow Iran and North Korea to open official schools in the US as well.

The ISA has run afoul of Virginia law before in hiring a bus driver, Abdelrazeg Abdalla, who had a suspended license, seven traffic violations, a misdemeanor for kidnapping his wife and child at knife point, and a six month detainment by Homeland Security. Nevertheless, the ISA hired Mr. Abdalla as a bus driver. Mr. Abdalla, operating a faulty ISA, bus was responsible for a 2005 multi-car accident.

Additionally, the ISA winner of the superlative Most Likely to Be a Martyr, and 1999 class valedictorian, Ahmed Omar Abu Ali, has been convicted on charges of terrorism and attempting to assassinate President Bush. On June 6, 2008, that conviction was upheld by the 4th Circuit Court of Appeals.

As a result for the a May 19 hearing, the ISA’s lease of Fairfax County property continues for another year, as the Board of Supervisors unanimously supports the ISA as a model school beyond reproach.

A video of the complete May 19 Fairfax County Board of Supervisors Hearing on the Islamic Saudi Academy can be found at: www.fairfaxcounty.gov/cable/channel16/vod.htm

Select “Public Hearings” from the May 19 links.

Of note in the video of the May 19 meeting:

42:58 Fairfax County Chairman Connolly charges of slander remarks
49:35 Supervisor Gross: Latin can be violent and Parochial Schools contain material as equally offensive as the ISAs.
1:02 Supervisor Hyland begins testimony about why and how they’re is no documentation on his investigation