Gates of Vienna has written about the plight of Christians in Iraq before, beginning in 2006. You can find the stories here, here, here, and here.

Christians are for the most part hated in Iraq. They tend to be better educated and from the higher classes. As a result, they often serve as scapegoats for angry Iraqis, who have even crucified Christian Iraqi children. 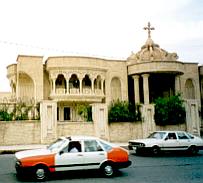 In the years of the war, Christian refugees have spent their time shuffling from Damascus, where they are tolerated, back home again, or out of the Middle East all together. Some have gone to Iran, where they feel safer, at least for a while. Others have died, often in their churches, specifically targeted for their religion.

Today, someone sent us a story on the Christian Iraqi refugees that Germany has taken in:

…Reports compiled by the [Foreign Ministry department — headed by …Frank-Walter Steinmeier, a member of the Social Democratic Party (SPD) — paint a grim picture of the situation for Christians in Iraq. Only 400,000 of the 800,000 Christians who were living in Iraq in 2005 remain there today. “Threats, murder and abduction are part of daily life for Christians in Iraq,” says the German government’s human rights commissioner, Günter Nooke, a member of the conservative Christian Democratic Union (CDU). According to Bishop Wolfgang Huber, the head of the Evangelical Church in Germany, Christians in Iraq face violence that is the equivalent of “ethnic cleanings and genocide in other places.”

Huber has quietly joined forces with representatives of the Catholic Church to campaign for the establishment of a German humanitarian assistance program, and his efforts have apparently met with success. This week Erika Steinbach, human rights spokeswoman for the CDU and the Christian Social Union (CSU) joint parliamentary group, plans to argue for a contingent solution that would involve the rapid acceptance of a large number of refugees in Germany.

The Interior Ministry has already taken an important humanitarian step. In a decree dated May 15, 2007, Interior Minister Wolfgang Schäuble (CDU) ordered that asylum already granted to Iraqis should not be revoked “for the time being.” It could be assumed that Christians from central and southern Iraq, Schäuble wrote, were being “generally persecuted as a group by non-government parties in Iraq.” This provides the roughly 2,500 refugees already in Germany with the certainty that they will not be sent back to Iraq, at least for now.

In a few days, however, there will be far more at stake within the Human Rights Commission in the German parliament, the Bundestag. The churches want lawmakers to guarantee the long-term right of asylum and settlement for a much larger number of refugees — between 20,000 and 30,000 Christians who are part of the educated upper and middle classes in Iraq. There is enough capacity in Germany, argues Bishop Huber, “to provide, in collaboration with European partners, a relevant number of Iraqi refugees with the opportunity to settle here.” According to a spokesman of Interior Minister Schäuble, the government “is thinking about a contingent solution.” Human rights commissioner Nooke also favors Germany accepting the Iraqi refugees.

What are not mentioned are possible fissions and fractures that will arise between the Iraqi Chaldean Christians and the numerous Turkish immigrants already present in Germany for some generations. The harsh treatment of Christians in Turkey, and the contempt in which they are held by most Turks, could prove to be a problem for the peaceful assimilation of the new arrivals.

10 thoughts on “Chaldean Christians in Germany…Meet Your Turkish Neighbors”