Our expatriate Dutch correspondent H. Numan sends his take on the recent arrest of a Dutch cartoonist for “discrimination”.

Welcome to the Dutch Democratic Kingdom
by H. Numan

That is over. On the 14th of this month Gregorius was arrested by a team of no fewer than ten police officers. He was taken into custody, and since the District Attorney deemed his works both highly offensive and commercial, he was kept locked up for two days. After release, he was told: “You can forget about anonymity now. They know who you are.”

This arrest creates a serious political row. The parliament, to their credit, from left to right, wants an explanation from the minister for Justice, Hirsh Balin. And it better be a good one, for more and more information comes to earth that this is pure political intimidation, if not outright state terrorism. 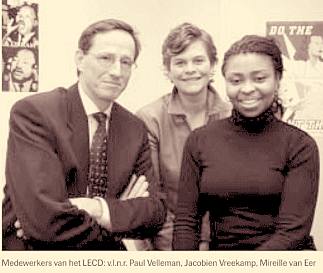 Let’s look at the District Attorney first. The man ordering the arrest is Mr. Paul Velleman. He is the chief prosecutor for the district of Amsterdam. But he doesn’t wear only this cap. His other cap is head of the ‘Landelijk Expertise Centrum Discriminatie (LECD)’ or National Expertise Center for Discrimination. This organization forms part of the ministry of Justice and controls tax money given to (non-governmental) anti-discrimination bureaus nationwide. Hardly a non-biased man, as everybody will have to admit.
– – – – – – – – –
According to a statement of the Justice Department in Amsterdam, the District Attorney Mr. Paul Velleman had to act on an investigation directed by Mr. Paul Velleman as Head of the LECD. This is supposed to be a neutral, non biased investigation? In that case, the German Democratic Republic was indeed a democratic republic, and Kim II the elected official of North Korea!

It gets even messier: when taking parliamentary questions, minister Hirsh Ballin answered that it took three years to find this Gregorius Nekschot. Which is an outright lie: three years ago an investigation indeed started, but was not continued. It stopped. All that was necessary was a phone call (plus a court order) to the service provider to give the address of Gregorius Nekschot. Nekschot wasn’t hiding in any way whatsoever. He just didn’t want members of the religion of peace to find his address too easily.

Normally, since there is no reasonable expectation of violence or the suspect fleeing justice, no arrest would be made, not even by a single officer. The suspect would merely receive a letter instructing him to explain himself to the DA. The ten man strong team searched the premises, and confiscated his computer, USB stick, and mobile phone. This is actually illegal! One cannot be convicted for works as yet not published, no matter how offensive or discriminatory they might turn out to be. Gregorius’ complete works can be found by simply visiting the website of the cartoonist. He has published hundreds, and only eight of them are considered discriminatory.

This Al Capone style action follows the words of the mayor of Amsterdam to attack discrimination more strongly. Well, they choose the perfect timing for it: on the 15th of May 1940 The Netherlands had to surrender to the German Third Reich.

On the 5th of May another incident took place, and in this case no prosecution is even planned! The 5th of May is Liberation Day (from the above mentioned Reich). It’s celebrated nationwide, with lots of activities. One of those was a gay fashion show. 10 Moroccan youths attacked, and dragged one of the models from the stage and severely beat him. They also manhandled members of the public, who tried to rescue this model. The gay organization COC “contemplates” a complaint. No arrests were made. As far as I know, none is planned. The victim filed a complaint, but of course it is placed at the bottom of the stack. The police are very busy, you know. Not a word from our lord mayor here. Surely this is discrimination at its worst?

Of course there is a reason why Gregorius Nekschot meets the rough hand of (in)justice. The reason is Wilders. What else? Wilders faces, technically, several hundred if not a thousand lawsuits. Not one of those complaints and lawsuits have been presented in court. That hurts. Especially if you are Mohammedan, of if you are left wing activist. The government itself would love to see Wilders either in jail or at least marched out of parliament. Preferably on a rail dressed up with tar and feathers. But that is not going to happen.

To counter Wilders – and I have no proof of this – a new political party ToN has been set up. (Trots op Nederland – Proud about The Netherlands) This party is polled at 20-25 seats. However, the party has no real political agenda as yet. Anything goes. The leader, Mrs. Verdonk, actually invites the public to tell her what issues matter to them. This is the world on its head. A political party should stand for something, and based on their program gain support. This is populism at its best, or more correctly, at its very worst. As long as ToN has no program, and can claim “yes, we’d like that too” they will do very well in any election. Only it doesn’t work that way. As soon as elections will be held they must have a program, and that invariably leads to taking a stand. You can’t be republican and monarchist at the same time. Either one or the other.

Clear proof of my claim might be the position of ToN on the proposed Turkish EU membership: they are in favor! Nationwide, a majority is utterly opposed. About 65% of the country would vote against it, given the chance, and have shown it in many polls already. A political party that claims to represent the people of the nation, as ToN does, cannot possibly be in favor of something like this. As soon as this item hits the news, as inevitably it will, it might very well kill the party.

Of course many people will realize that. Certainly our professional politicians, who are anything but stupid. (But you certainly get that impression given the arrest of Nekschot.) Therefore I can only come to the conclusion ToN is set up to hurt the PVV, Wilders’ party.

Since Wilders cannot be touched, somebody else more vulnerable is targeted, and this is Gregorius Nekschot. He is an ordinary fellow, can’t afford massive protection, draws quite a bit of attention and nicely sends a message to Wilders, and more important: to people like us. The message: we are out to get each and every one of you, while we still can.

18 thoughts on “Welcome to the Dutch Democratic Kingdom”